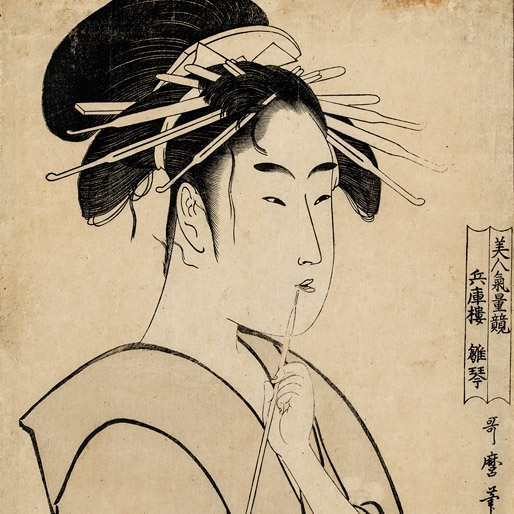 This exhibition consists wholly of works from the Museo de Bellas Artes of Bilbao. It shows a selection of pieces from the collection of traditional Japanese art that was assembled by the collector José Palacio (1875–1952) in his Bilbao home at the beginning of the 20th century and has belonged to the museum since 1954.

Palacio’s fondness for oriental art led him to amass a fine and notable collection of Japanese works, which he chiefly purchased in Paris. Japan’s opening up to trade during the Meiji era (1868–1912) led to the mass exportation of Japanese pieces and objects, which were sold for huge sums in the French capital. A keen fascination for Japanese culture and art thus emerged in mid-19th-century Europe: the phenomenon so-called Japonisme, the craze for collecting Japanese art and its influence on great European artists – Manet, Degas, Monet, Toulouse-Lautrec and Van Gogh.

This collection is characterised by the quality of its pieces and the refined taste in their choice. The exhibition features 24 ukiyo-e prints of the 18th and 19th centuries, a painting by the great artist Kawanabe Kyōsai and some 20 objects used for various purposes. They are complemented by a pair of 17th-century Japanese weapons on loan to the Bilbao museum from a private owner.

Prints
During the Edo period (1615–1868) printmaking became the chief form of artistic expression of an urban bourgeoisie with a lifestyle focused on leisure and popular entertainment, the so-called ukiyo (“floating world”) culture. Ukiyo-e (“painting of the floating world”) prints were mass reproduced at a low price. Some of their most common subjects, which are shown here, are beautiful women, literary scenes, genre scenes and parodies, kabuki theatre scenes and actors, nature scenes and landscapes. They are colour woodcut prints (nishiki-e), some belonging to very luxurious editions commissioned for commemorative purposes (surimono).

As a result of their enthusiastic reception in Europe in the 19th and 20th centuries, some of the artists, such as Utamaro, Hokusai and Hiroshige, became sources of inspiration for many western artists and universal figures in the art world. Interestingly, Japanese art found its way into the West through artists who enjoyed little prestige in Japan as they worked in a lesser genre aimed at the mass market.

Objects
Japanese urushi lacquerware is one of the most beautiful expressions of the art of the period. The wooden objects made using this technique were highly sought after by European collectors owing to their original designs and exquisite workmanship, and they greatly influenced the western decorative arts. They were intended for all the social classes and for various purposes. The exhibition features small, painstakingly crafted boxes for holding incense, writing implements, or papers; cases for pipes (kiseru-zutsu); and wooden cases (inrō) that hung from the kimono sash with the aid of a figure that acted as a counterweight (netsuke).

The exhibition also includes pieces related to the samurai caste, such as traditional weapons: the katana (long sword) and hamidashi (short dagger), and tsuba, guards which separated the hilt of the Japanese sword from its steel blade.