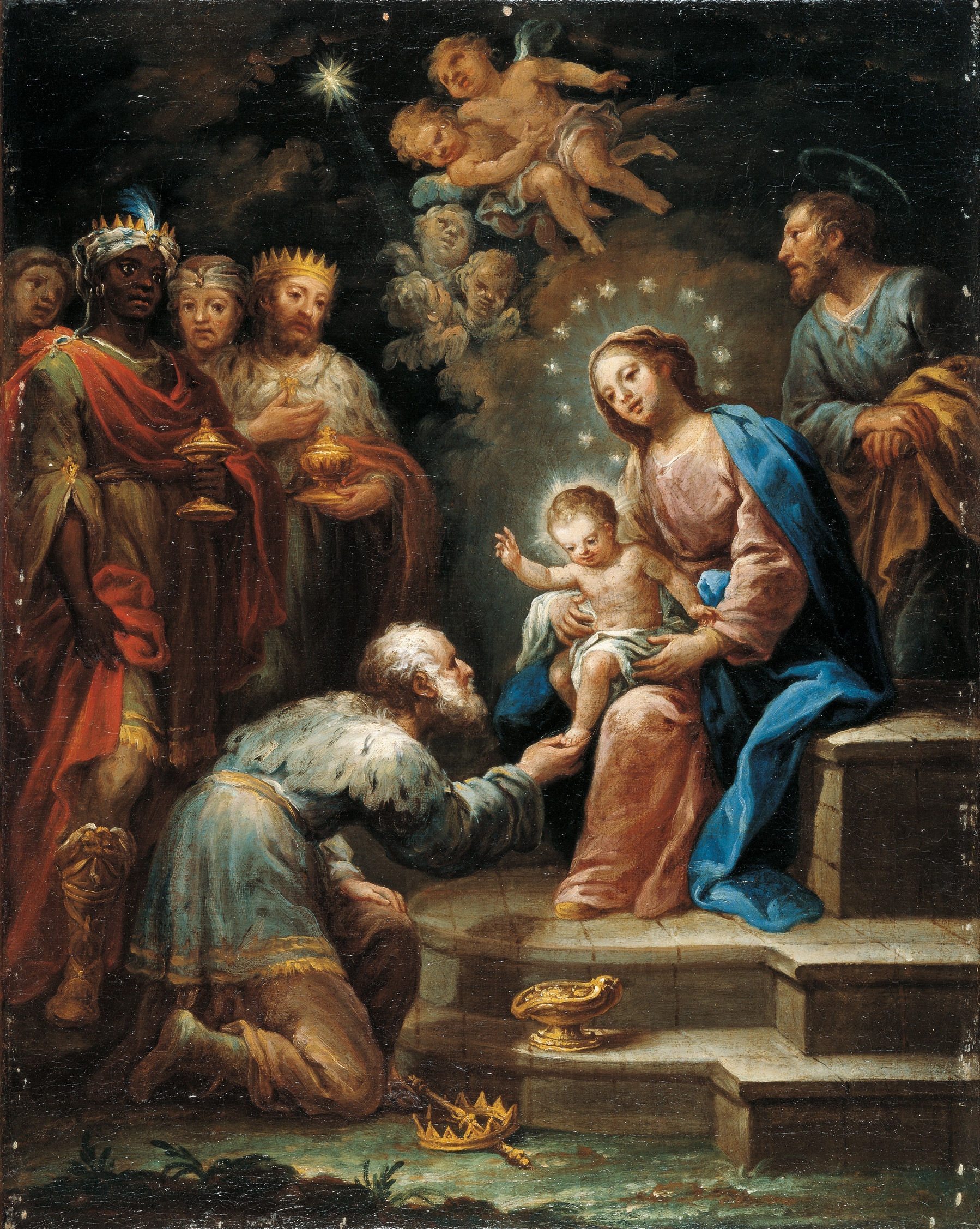 Adoration of the Magi

Together with the Visitation, Flight into Egypt and Trinity of the Earth, and as already mentioned in this catalogue, this work forms a series of paintings by Ezquerra in all likelihood originally intended to adorn a private oratory. Evident in all four paintings is a sketchy technique and a palette with a tendency towards warm tones, features typical of this painter's style and a reflection of the influence of Carreño. Noteworthy too in all four paintings is the continuity of the colours and their vibrant use – techniques which doubtless served to reinforce the sensation of each one as part of a whole and which were the result of Ezquerra's admiration for the Venetian style.

All four works possess a character clearly linked to the late Baroque style and confirm the survival of the traditional Madrid style – best defined by the kind of painting produced in the capital in the late 17th century and early decades of the next century.

Ezquerra interprets the scene in the Adoration of the Magi in the early Christian manner, which is the most frequent, although its iconography had gradually been developing over a period of more than five centuries. Only the Gospel of St Matthew mentions the Wise Men (Matthew 2: 1–12), but does not specify that there were three. This piece of information was incorporated into ecclesiastic doctrine after the 5th-century Pope Leo I cited that number in Epiphany Sermons. It is possibly an idea related to the convention of alluding to the three ages of man and also to the races that descended from the patriarch Noah's sons Shem, Ham and Japheth, as based on apocryphal texts from Genesis with a symbology clearly intended to express the universal character of the Redemption of Christ. The Magi also represented the three continents known at the time: Europe (Melchior), Asia (Gaspar) and Africa (Balthasar), and the number three could, furthermore, be associated with the mystery of the Holy Trinity. To all of these considerations contributing to the definition of the iconography related to the theme should be added the fact that the gifts borne by the three kings were an allusion to the threefold condition of Jesus: gold (King), incense (God), and myrrh (Man, as that substance was used for embalming corpses). The first reference to Balthasar's black skin was made by the Venerable Bede in the 8th century (B. Pascal, 1856, t. 1, 125), although that personage was not customarily depicted as black until the 14th century, when the Magi were represented with different racial features in Flemish Gothic art. Although they were attributed with their names in the 4th century, they were not fully accepted by Christians until the 9th century, when they were acknowledged in a Pontifical of Ravenna. Four centuries later, Jacobus de Voragine discussed the Greek and Hebrew equivalents of their names in The Golden Legend.

During the Counter-Reformation no changes were made to the traditional iconography associated with this theme which became consolidated in the 16th century, as there was little disagreement regarding representation or interpretation, although at the beginning of the century Luther had denied their kinghood. The commonest representation in 17th-century Spain was that reflected by Ezquerra in this work, in which he was influenced by the recommendations of Pacheco: only one of the kings is elderly, all three are dressed in rich garments and the Child is sitting on its mother's lap. The devotional sense of this type of work is clearly reflected in the following passage from Flos Sanctorum a book by the Jesuit Pedro of Ribadeneyra published in 1599: "In the sacred mystery of the Epiphany, the holy Church celebrates the jubilant day on which the Son of God made flesh was shown to the first gentiles: the Magi... It was his wish to make himself known to all, near and far, to native and outlander, to shepherd and king, to the simple and the educated, to rich and poor, to Hebrew and pagan, to Jew and gentile, and bring the different religions together by means of the knowledge of one God." (ed. 1982, t. 1, 116).

Adoration of the Magi