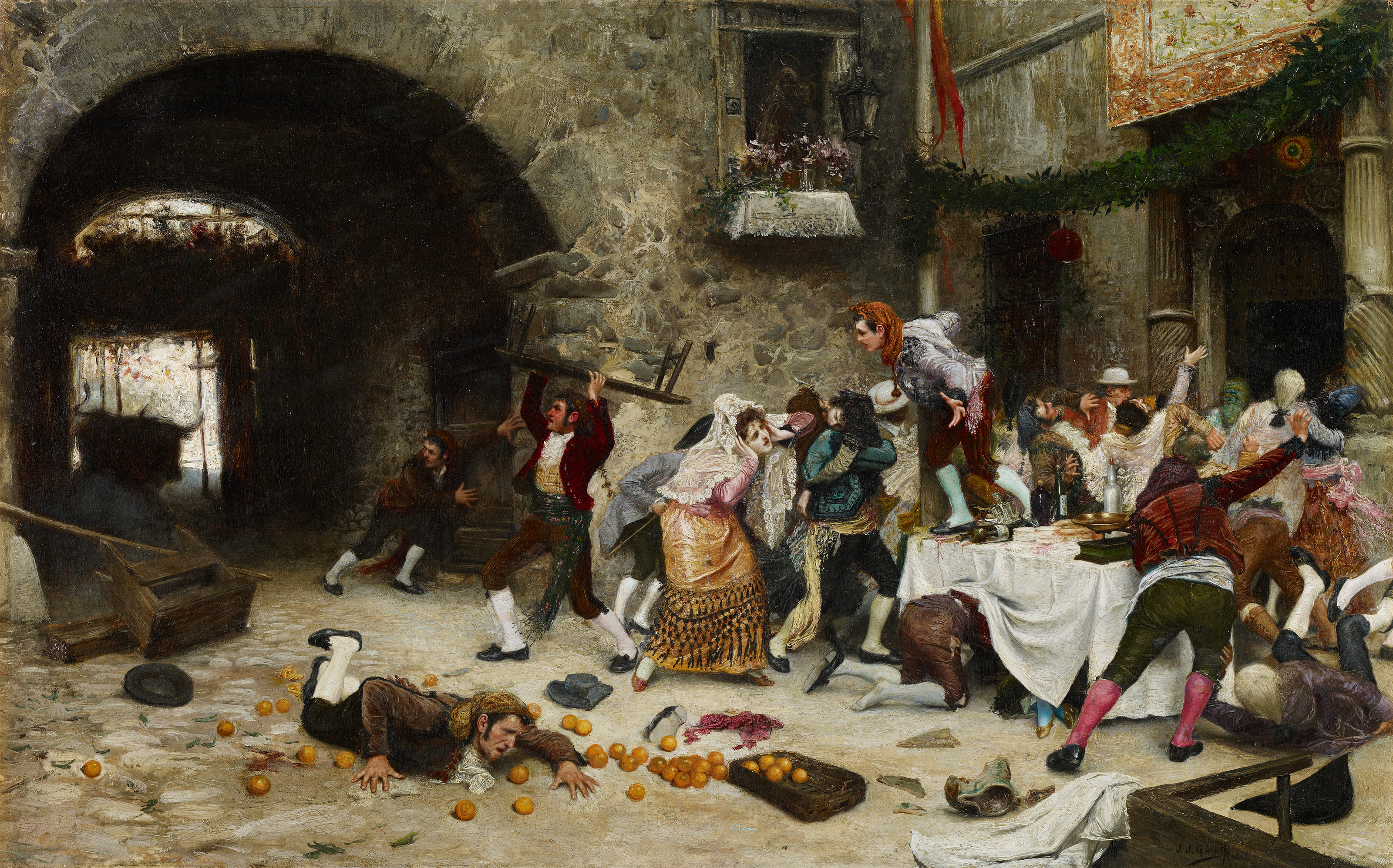 In addition to the bullfighting scenes that reached their height of popularity in art in 19th-century Spain, pictures illustrating separate episodes in the life of bullfighters and situations involving fierce bulls outside their usual context soon emerged, in both cases with a pronouncedly anecdotal flavour. Of the illustrations of the latter kind, perhaps the most fortunate was the one titled ¡Se aguó la fiesta! (“The Fun was Spoiled”) by Enrique Mélida, a work that went missing from the Prado collection and won a second medal at the National Exhibition of 1876.1 A gauge of its success is the host of copies and versions of it that turn up fairly frequently on the Spanish art market.

In these compositions dating from the last decades of the 19th century, the idea of a ferocious bull bursting onto the scene and interrupting a pleasurable situation always goes hand-in-hand with the appearance of a dashing young man who acts as a bullfighter and risks his life by confronting the bull while the rest of the terrified people run for safety. Such is the case of the Interrupted Banquet, which depicts the moment when a bull disrupts a banquet taking place in the courtyard of an inn in the late 18th century, a golden age for bullfight enthusiasts. With the exquisite detail that characterised most of his production, which features many courting and serenading scenes largely involving bullfighters, Gárate painstakingly describes the havoc wrought by the bull’s unexpected appearance. The guests hurriedly seek shelter in the background and inside the inn and in their haste leave behind their hats and shoes. Several majos carry their fainting female companions, while the women not yet overwhelmed by the dangerous turn of events are stricken by panic and yell in despair and bewilderment. Other people trip over during their hasty flight, such as the majo in the foreground lying by an upset basket of oranges, and the gentleman with a wig who has fallen on his back by the table. But far from being infused with drama, the people’s desperate search for a safe spot has a predominantly comic slant, as evidenced by details such as the man who tries to hide beneath the fragile banqueting table, surrounded by his companions’ shoes.

Contrasting with the disaster, which is depicted in detail with a clear narrative interest, on the other side of the canvas the sombre silhouette of the bull passing through the semidarkness of the arch stands out against the light of the whitewashed wall in the background. A boy tries to stop it, hurling the benches on which the guests were sitting into its path. This bullfighter figure, dashing and skilfully drawn, is only emulated to an extent by another young man standing on a table who encourages his defensive operations.

In this composition, which features more figures than the Teruel-born painter usually handles, Gárate employs his careful technique, paying great attention to the lighting and rendering of textures, using tight, painstaking brushstrokes. As in this work, he usually captures the more dramatic aspects of light reflections on the various surfaces, which he takes pleasure in depicting with a host of details and accessories that enhance the decorative nature of the painting.