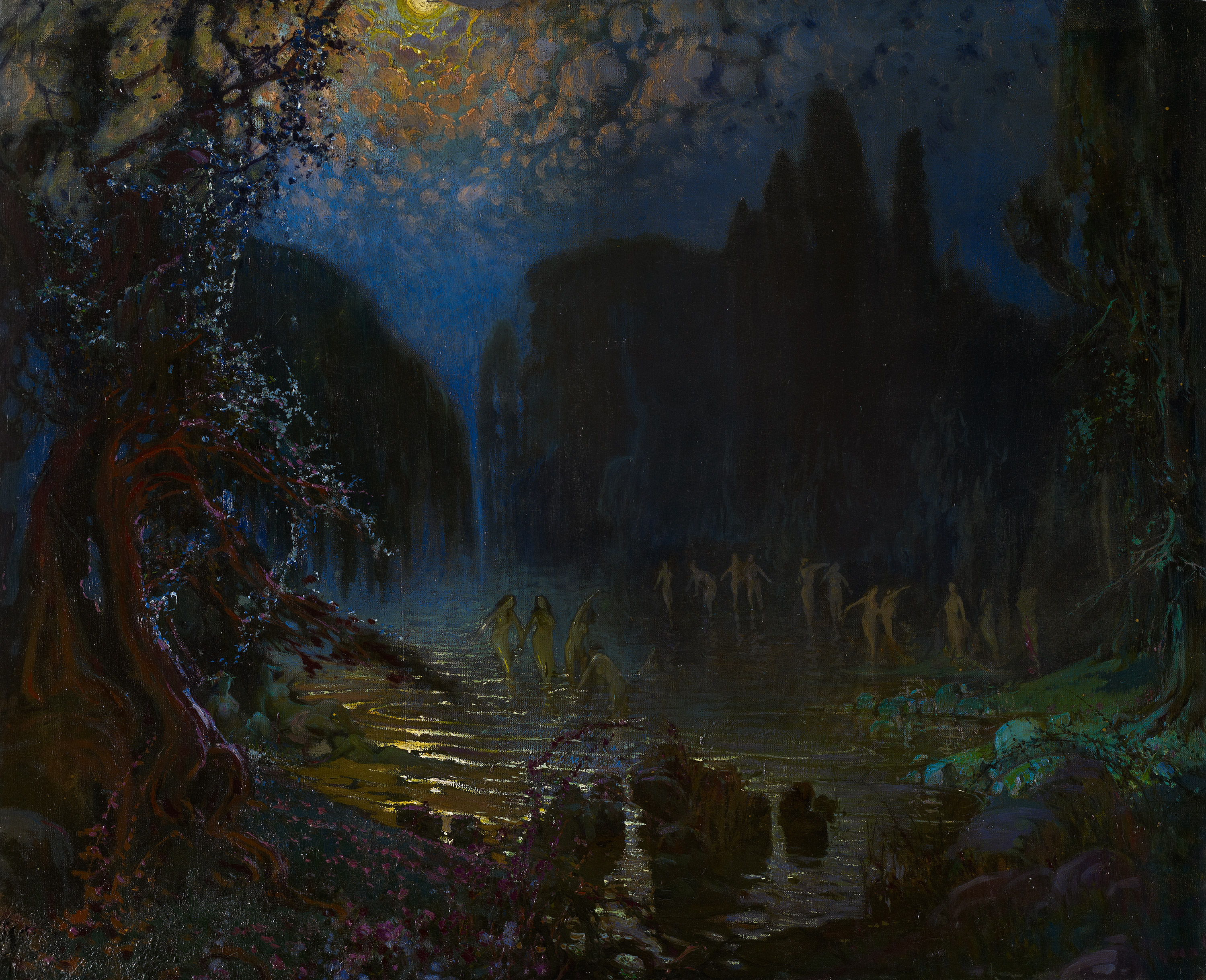 Bathing of the Nymphs

Visible from a river bank, at the dead of night, a group of completely naked women with their hair flowing free stand in a pool of water. As if indulging in some ritual amid a lustful form of nature which, far from hiding them, actually frames their mysterious actions and endows them with a sense of the theatrical, some stand up to their knees in water while others lie on the bank, basking in the moonlight. Depicting a forest at night allows a use of colour ranges far removed from reality and serves to augment the dream-like sensation of the scene. The tree trunks and roots by the bank, dotted with vivid magentas and electric turquoises, are lit by a yellow fantasy moon that edges clouds, crests of gentle waves and small female bodies with gold and bright grey as the women abandon themselves to their bathing or leisure and thus fill the painting with a lewdness that practically turns the observer into a spying satyr.

Passionate and eccentric, the art of Antonio Muñoz Degrain developed from the boldness with colour and light which characterised his work in the 1880s into an idiom of his own, in total contrast with the Spanish art at the turn of the 20th century. This painter expressed himself through irrational, excessive intonations, treated with a free yet forceful approach to drawing whose results, artistically speaking, are extraordinary. Thus, his inimitable style is very easily identified in this painting, especially in the vegetation framing a scene filled with such amazing vivacity. The powerful rendering of the trees and the brilliant, lush gestuality of the foliage leave no room for doubt as to the painter’s identity. However, the central scene in the composition suggests a very different hand, one much less vigorous and more compliant with previous models. It is possible that it was the almost unknown artist Flora López Castrillo who took over precisely that part of the composition. Flora López was a pupil and intimate friend of Muñoz’s (who shared the last years of his life and creativity with her) and – in the few definitely identifiable examples of her art – was his most faithful and devoted follower. She was always attentive to her master's models, and her fusiform figures, like those in this canvas, tend to replicate his style, although the result is excessively neat and less spontaneous.

On the other hand, Muñoz Degrain was an avid reader of fiction and the Classics and often drew inspiration from them for his paintings. One such work is the magnificent landscape Lampetia and Phoebe, in the Museo del Prado, in which he alluded to the symbolist appeal of lakes (as did his pupil in the small number of paintings attributed to her). It is therefore tempting to associate this picture with images of nymphs bathing as described in Classical literature; or perhaps in more modern texts which might have aroused the painter's interest in a subject which he literally resuscitated, due to the height of Symbolism at the turn of the century. Here we might recall the delicate, sensuous poetry of José-Maria de Heredia (1842–1905), a reputed Parnassian of Muñoz’s generation, with his poem Le Bain des Nymphes, which if nothing else, reveals a common aesthetic interest in the enjoyment of fantasies of this kind:

Bathing of the Nymphs