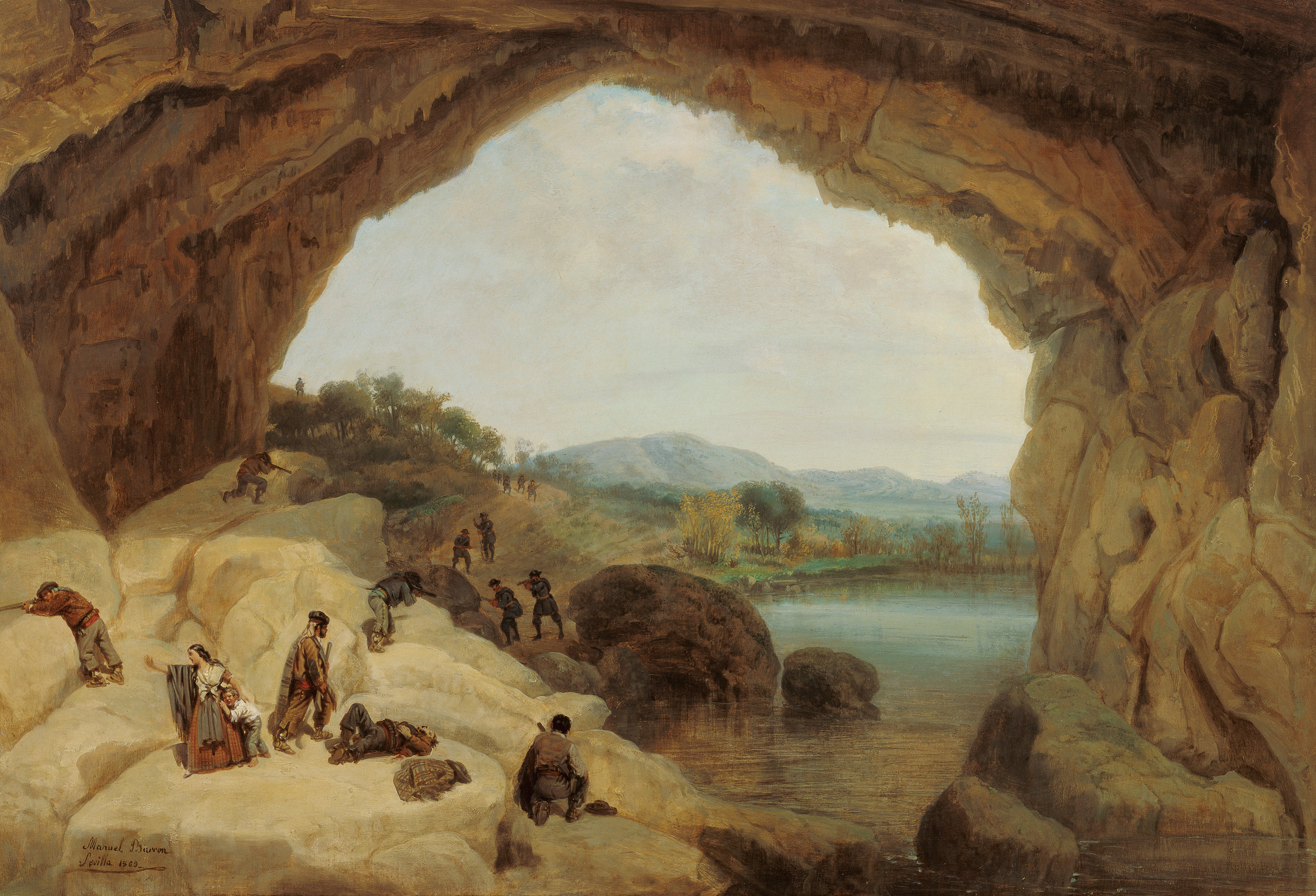 Ambushing a Group of Bandits at the Cueva del Gato

Beneath the imposing ceiling of the cave’s entrance, a group of bandits face an ambush laid for them by several civil guards who approach from a nearby hill firing their guns. The bandits on the rocks defend themselves with their blunderbusses from the guards’ attack. One lies wounded on the ground, while a tearful child, startled by the sound of the gunshots, clings to his mother, who begs for a ceasefire.

The Cueva del Gato, located very near Benaoján, was one of the best known hideouts of bandits and smugglers in the Sierra Morena mountains during the 19th century. This huge limestone cave is situated some ten kilometres from the town of Ronda, close to the river Guadalevín. The river Guadares or Campobuche runs through the cave and out of the opposite entrance before flowing into the river Guadiaro. Measuring 4,480 metres long, owing to its size and the shelter it provided from the elements, the cave was inhabited from the Palaeolithic period and is therefore an important archaeological site as it was also used as a burial place, in addition to being a nature spot of great beauty and speleological interest today.

Of the many landscapes Barrón painted of the town of Ronda in Malaga and its surroundings throughout his lifetime, the picturesque setting of the famous Cueva del Gato was undoubtedly the artist’s favourite, judging from the several known versions he painted of this impressive cave. The best known of them all is the one signed by Barrón in 1860 and housed in the Seville Museum of Fine Arts. It belongs to the same small set as two other canvases of the same size depicting Lavanderas al pie de la ciudad de Ronda (“Washerwomen at the Foot of the Town of Ronda”) and Contrabandistas en la serranía de Ronda (“Smugglers in the Mountains of Ronda”).

The canvas in the Seville museum, analysed years ago by Reina Palazón, is extremely similar to the present version, hitherto unpublished, in the description of both the ambush at the cave and the foreground figures, some of which are literally repeated (although the wounded man lying on the ground and the one lying in wait far right are replaced by two smugglers who crouch down to protect themselves from the shots). However, what is most striking about the two versions is the differences in the lie of the land – precisely the feature that might be expected to be more unchangeable. The tranquil landscape that unfolds in the background of the present painting, topped by gently sloping mountains in an open, uncluttered panoramic view, is much more rugged in the Sevillian painting, crowned in the distance by a lofty crag that attracts the spectator’s attention. Once again, this attests to the absolute creative freedom of the Romantic landscape artist, who takes the liberty of transforming a real view of nature with his imagination, reworking it at will in his studio in order to emphasise the most striking or picturesque aspects. This slightly eerie and dramatic appearance of the rocky landscape framed by the spectacular entrance to the cave, which seems to link Barrón unconsciously with German Romantic landscape painting, is further enhanced by the scenographic treatment of the setting, which is given a noticeably theatrical layout in the manner of stage wings. The artist aligns the planes horizontally with the edge of the canvas, marking the areas of light and shadow very dramatically in order to lead the spectator’s gaze to the clarity of the distance. He also displays a special decorative instinct in the handling of the picturesque landscape, which is interwoven with the thread of a plot represented by the small figures that always populate his views, and uses a palette of vivid but not garish colours. All these features are characteristic of the oeuvre of Barrón, of which the collection of Baroness Carmen Thyssen-Bornemisza holds another interesting example,5 and account for much of the appeal and success his landscapes enjoyed among the clientele of the day.

A third version is known of this view. Reported a few years ago by Arias Anglés, it has a somewhat simpler composition and setting and displays differences in the landscape visible through the mouth of the cave. The smugglers gather in the immediate foreground, while one guards the entrance to their hideout, indicating that, as this author suggests, the different scenes of bandits set in the same landscape appear to follow a narrative sequence. Finally, the existence of a painting practically identical to this last version by Barrón, oval in shape and signed by the more mediocre painter Juan Pérez Villaamil in 1858, confirms the existence of an initial compositional model executed at an earlier date than Barrón’s three versions known so far, although we cannot rule out the possibility that Villaamil based his work on a first, as yet unknown version by the Sevillian painter, as the profiles and creative talent of the two painters make any other explanation unlikely.

These repetitions of the same landscape with minor variations are also proof of the special appeal naturally formed caves held for European and Spanish Romantic landscape painters owing to their eerie and somewhat mysterious quality that so often inspired the imagination of painters, writers and stage designers throughout the 19th century. Indeed, even in the timid field of Spanish Romantic painting, a few other examples may be found that are extremely similar to the present composition both aesthetically and in purpose, even though their resemblance is most likely a coincidence. Such is the case of a canvas by the little known Cordovan landscape artist Juan Belmonte y Vacas (1828–64) showing the Cueva de Las Palomas. Valencia, which was painted in 1864 and is therefore strictly contemporaneous with these paintings by Barrón, and is based on the same aesthetic and scenographic concepts.

Ambushing a Group of Bandits at the Cueva del Gato