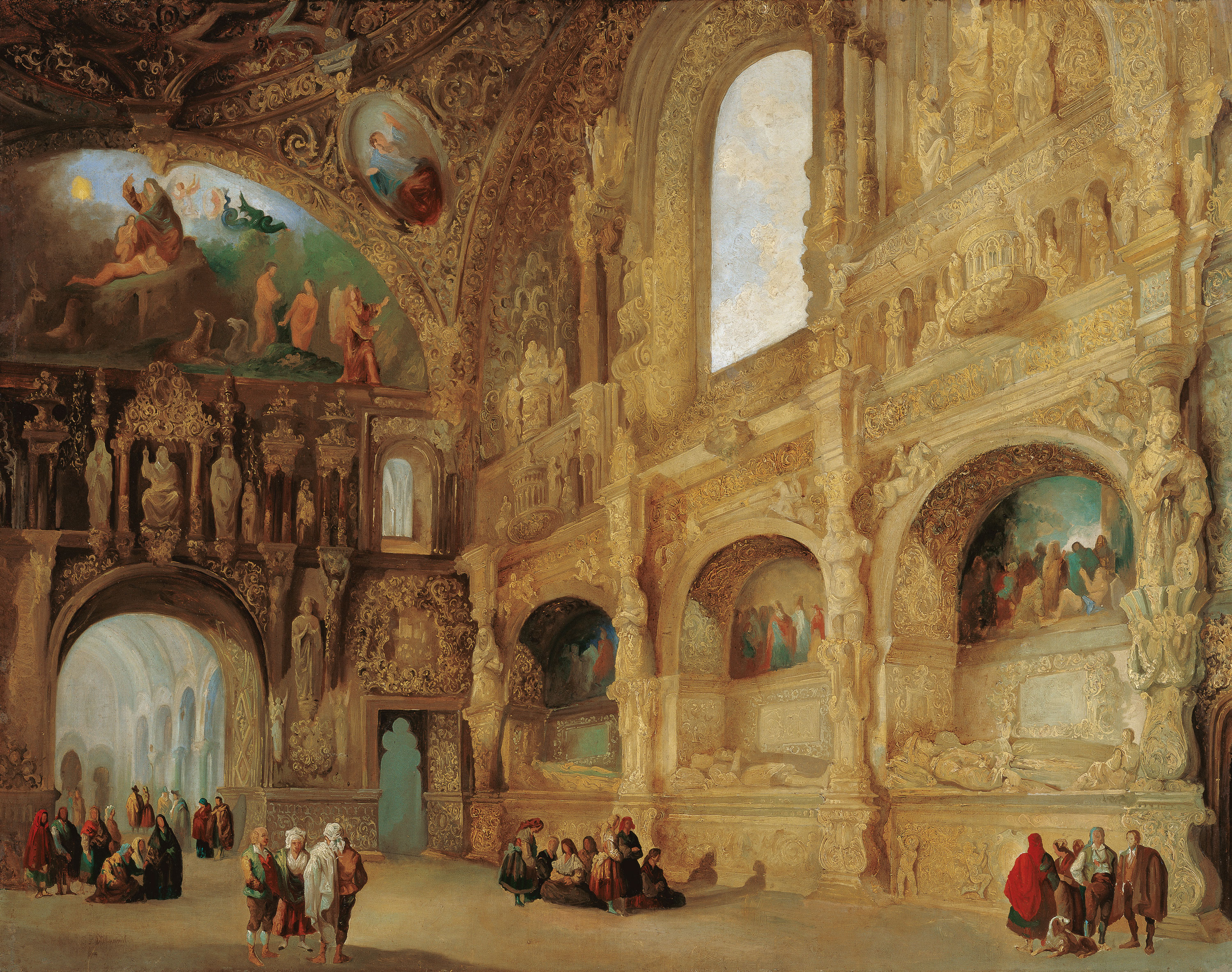 One of the most fascinating aspects of Pérez Villaamil’s oeuvre is his monumental interiors, of which he was a master in his day. He set a fashion for this genre, which was popular with his bourgeois clientele and would later be espoused by artists such as Parcerisa and Gonzalvo. Seduced by the roaming spirit of the European Romantic painters which he learned from his master, David Roberts, and in keeping with the Romantic zeal for rediscovering monumental testaments to the past with a concern for both documentary and picturesque aspects, Villaamil travelled around Spain recording everything interesting he found in drawings and sketches. His findings were later incorporated – as in this case – into studio paintings and were also used to compile the collection of lithographs entitled España artística y monumental, indisputably the most important 19th-century Spanish publication of its kind.

The present painting is a good example of this aspect of Villaamil’s art and of how monuments of the past were interpreted by the Romantic artists who, far from limiting themselves to objectively reproducing their appearance, did not hesitate to transform them with their keen sense of fantasy in order to enhance their proportions, the vividness of their colours or the Baroque nature of their decoration to the point that they are sometimes barely recognisable. Such is the case of this view of the chapel of the Benavente family belonging to the church of Santa María de Mediavilla in Medina de Rioseco, Valladolid, which fortunately still preserves all its decorative elements, although they are deteriorated.

Known as the “Sistine Chapel of Valladolid” for its decoration, this chapel, one of the most outstanding examples of 16th-century Castilian religious architecture, was built at the behest of the money changer Álvaro de Benavente by the architect Juan del Corral and his brother the sculptor Jerónimo del Corral. The building work began on 21 March 1544 and was completed two years later. The overwhelmingly profuse decoration, which completely covers the chapel, must have dazzled Pérez Villaamil, who attempted to capture its ornamental richness in this view of the entrance from the apse.

On the right are the paired tombs in which members of the Benavente family are interred. The married couples are represented by recumbent sculptures, “the men with cap and sable gown and a roll of papers in their hand, the ladies in the striking costume of the day, watched by a dog or a figure seated at their feet” as a symbol of faithfulness. The contract for the building work established that in the background of the sepulchral arches “in the remainder of these entablatures in the upper half-circle three devotional oil paintings by a very good hand shall be executed”, which were painted on panel by Antonio de Salamanca. The tombs are arranged according to proximity of kinship. Those on the far right belong to Álvaro de Benavente’s parents, and the lunette is decorated with The Raising of Lazarus. The next along are those of his maternal grandparents, and the painting under their arch is The Raising of the Widow’s Son at Nain. The tombs closest to the entrance are those of his great grandparents and they are decorated with The Raising of Jairus’s Daughter, though the subject of the painting can barely be made out. The iconography alludes to being raised from the dead, an appropriate theme for a burial chapel. In addition to the estipite columns and other sculptures, one of the most interesting decorations is perhaps the lunette in the upper part of the far wall, a polychrome stucco relief of The Creation of the World showing The Creation of Eve in the centre of the semicircle and The Expulsion from Paradiseon the right. Also visible above the keystone of the entrance arch is a Christ in Majestyflanked by twoAngel Musicians, accompanied in the rest of the wall by the statues of the four Fathers of the Church; in the upper part are one of the pendentives displaying an evangelist and a fragment of the Mudéjar-style dome with vegetal decoration and figures, also in stucco.

The ornamentation completely covering the chapel’s interior – a genuine horror vacui that was so characteristic of Plateresque art – appealed to the impassioned Romantic spirit of Villaamil. Far from merely reproducing it, he interpreted it with his own particular fantasy, exaggerating the effects of perspective, the colours of the paintings, the golden tone of the sculptures and the profuse ornamentation using his most supple and vibrant technique, applying dabs of impasto to suggest the reliefs, which are shaded with coloured glazes in the area of the sepulchral arches; this technique was widely used by the artist to create the gradations of light in the architecture, splendidly enlivening the interior of the chapel, in which several groups of locals add picturesque detail to the scene.

Although, since its sale in 1971, the painting has been quoted as being signed and dated 1842, no trace appears to remain today of this date, and doubts have even been raised as to the authenticity of the signature,5 even though the painting displays all the characteristic features of Villaamil’s mature style. Nevertheless, a few careless mistakes in the drawing and the somewhat sparing technique in some areas appear to confirm that this is an initial version of the canvas painted in 1847 and acquired by Queen Isabella II the following year for 24,000 reales, and from which it differs in its greater attention to detail and, above all, the chapel setting, which is bathed by the sunlight entering from one side, creating a dreamlike atmosphere that is extraordinarily suggestive. Perhaps the execution should be dated to around 1845–47, when Villaamil was working on several paintings for the palace, among them some of his masterpieces.

The preparatory study for both versions was a pencil drawing sold years ago that illustrates the artist’s working method. It was made from life, jotting down the main features in quick, brief strokes, and specifying the areas of shading and various decorative details in writing. There is another pen drawing which, together with the previous one, attests to the artist’s interest in the process of execution of this work. He is known on other occasions to have produced two paintings on the same theme with hardly any variations.

The present version is no doubt the one he still had in 1849 after selling the final version to the queen, as that year García Escobar mentions a “magnificent painting by Señor Villaamil, in which he has captured very beautifully the Chapel of the Benaventes. The celebrated artist kindly allowed us to examine it thoroughly in his studio”. It appears to have been preserved by the painter’s descendants until 1936.