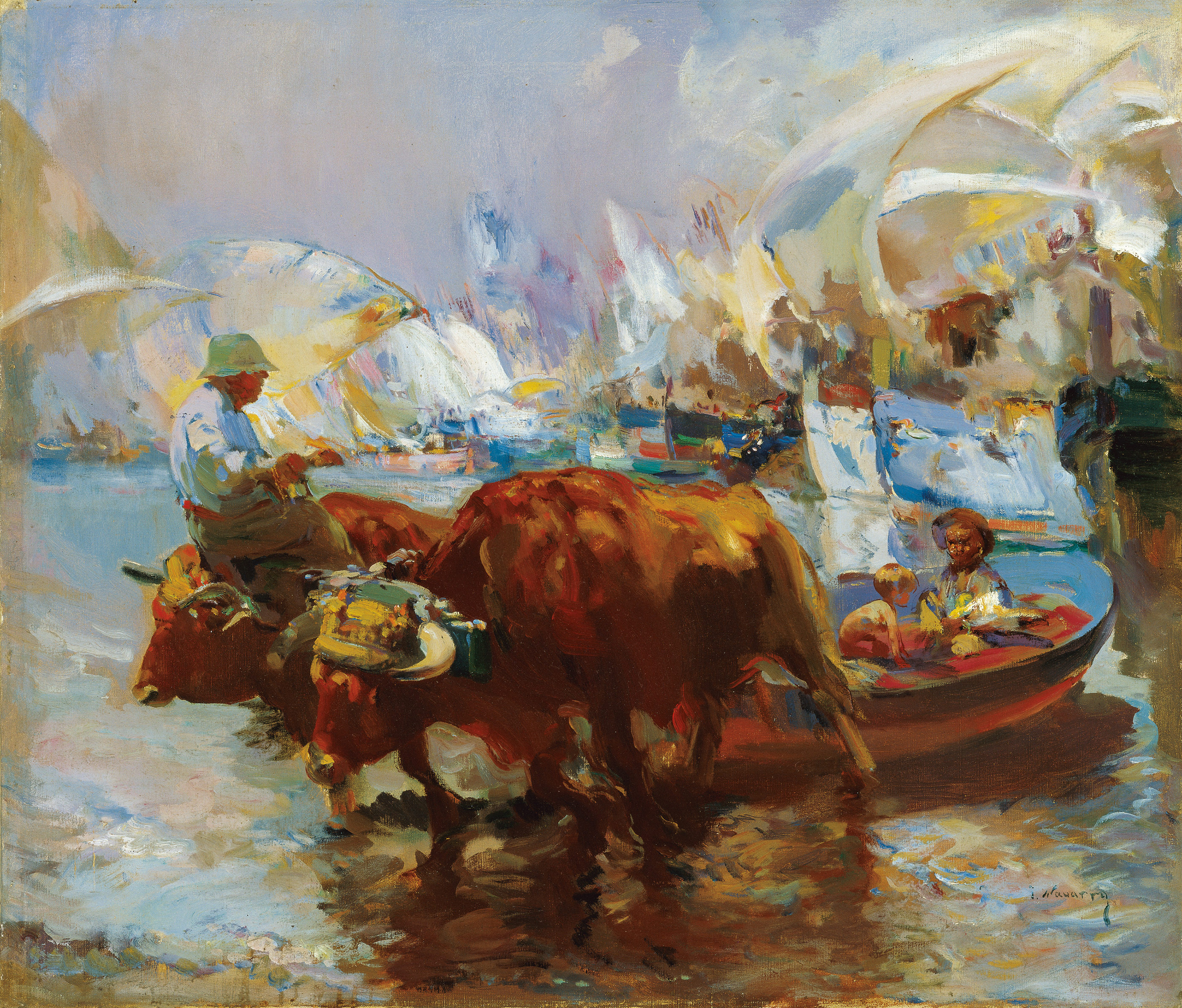 Arriving from the Catch

Bringing in the Catch was inspired by various compositions of Joaquín Sorolla's which Navarro reprocessed through a totally personal evaluation of colour and form. In this painting the most direct of these references is to Sorolla's La vuelta de la pesca ("The Return from Fishing" – 1894) now in the Musée d'Orsay, Paris, which was originally presented at the 1895 French Salon, where it won a medal second-class and was purchased by the French government for the Musée du Luxembourg. Between 1893 and 1894, Sorolla painted nine studies, some partial and others complete, for this composition, and in 1904 produced a new, sketchier version for his brother-in-law, Antonio García del Castillo. It was from these paintings by Sorolla that José Navarro took the two oxen with the fisherman astride one, looking towards the boat. Navarro Llorens's painting is possibly closest to Sorolla's 1904 work, in which the brushstrokes are much freer than in the 1894 picture. Another version entitled Playa de Valencia ("Valencia Beach") and reproduced by Bernardino de Pantorba also exists,3 but is less directly related to Navarro's painting. The figure of the naked child inside the boat can be compared with one of the figures in The Young Amphibians (1903), at the Philadelphia Museum of Art. Finally, the sail-filled background hiding the horizon has numerous precedents in compositions by Sorolla, including El baño ("Bathing" – 1899),5 which previously belonged to the Buenos Aires Jockey Club, and Playa de Valencia ("Valencia Beach" – 1908) at the Hispanic Society of New York.

José Navarro's reworking of Sorolla themes explains why the two soon came to be associated and why Navarro was even considered a sorollista or follower of Sorolla. As is often the case with the works of painters dubbed sorollistas, this picture is characterised by the peculiarity of its technique and its compositional clarity. The technique is based on the very large, loose brushstrokes which build up the volume of the figures virtually without previously drafted outlines. These figures merge into the surroundings so that the whole can be captured by the eye at a single glance. Because of this, the composition becomes more the result of a meticulous study of colour and light than a purely genre theme. As rendered by Sorolla, the world of Valencian fishermen became a vehicle for colour research that affected Sorolla's own contribution in an evident way.

Despite Navarro's obvious inspiration by Sorolla, this painting is different from the latter's, above all due to the much richer colour range. Whereas Sorolla tended to limit himself to blues, whites and ochres, Navarro's range in Bringing in the Catch is made more complex by the addition of reds, greens, yellows, mauves and pinks. Furthermore, these colours are used with brilliant, almost metallic qualities clearly different from the matt finish of Sorolla's – a characteristic that did not go unnoticed by the critics of the time. In 1925, José Francés referred to Navarro's works as "veritable little jewels [which] shine like gemstones skilfully set in precious metals", while pointing out that that peculiar form of decorativism was partly determined by the use of colour in "delicious ranges". Perhaps these précieux traits were influenced by the fan-painting with which the painter may have supplemented his income at the beginning of his career. José Francés, however, had justified those traits as a Valencian interpretation of Fortuny's style, which would explain the success of Navarro's paintings on the international markets, particularly in the Americas.

From the thematic point of view, this painting follows the lines of one of the specific varieties of genre painting made popular by Sorolla: two oxen dragging a fishing boat onto the beach with the horizon hidden in the background by the many sails of other boats also returning from fishing. The composition includes additional elements of genre painting: the fisherman sitting astride one of the oxen directing the action who closes the composition on the left; and the other fisherman with a young child inside the boat who form a group closing the composition on the right. The whole of the upper half of the canvas is covered with a colourful riot of sails and craft which merge into the clouds and the open sky in a way both confusing and verging on the abstract. This is the most creative part of the painting and a point where Navarro moved away from Sorolla's greater realism to produce a composition closer to Abstract Expressionism.

Arriving from the Catch