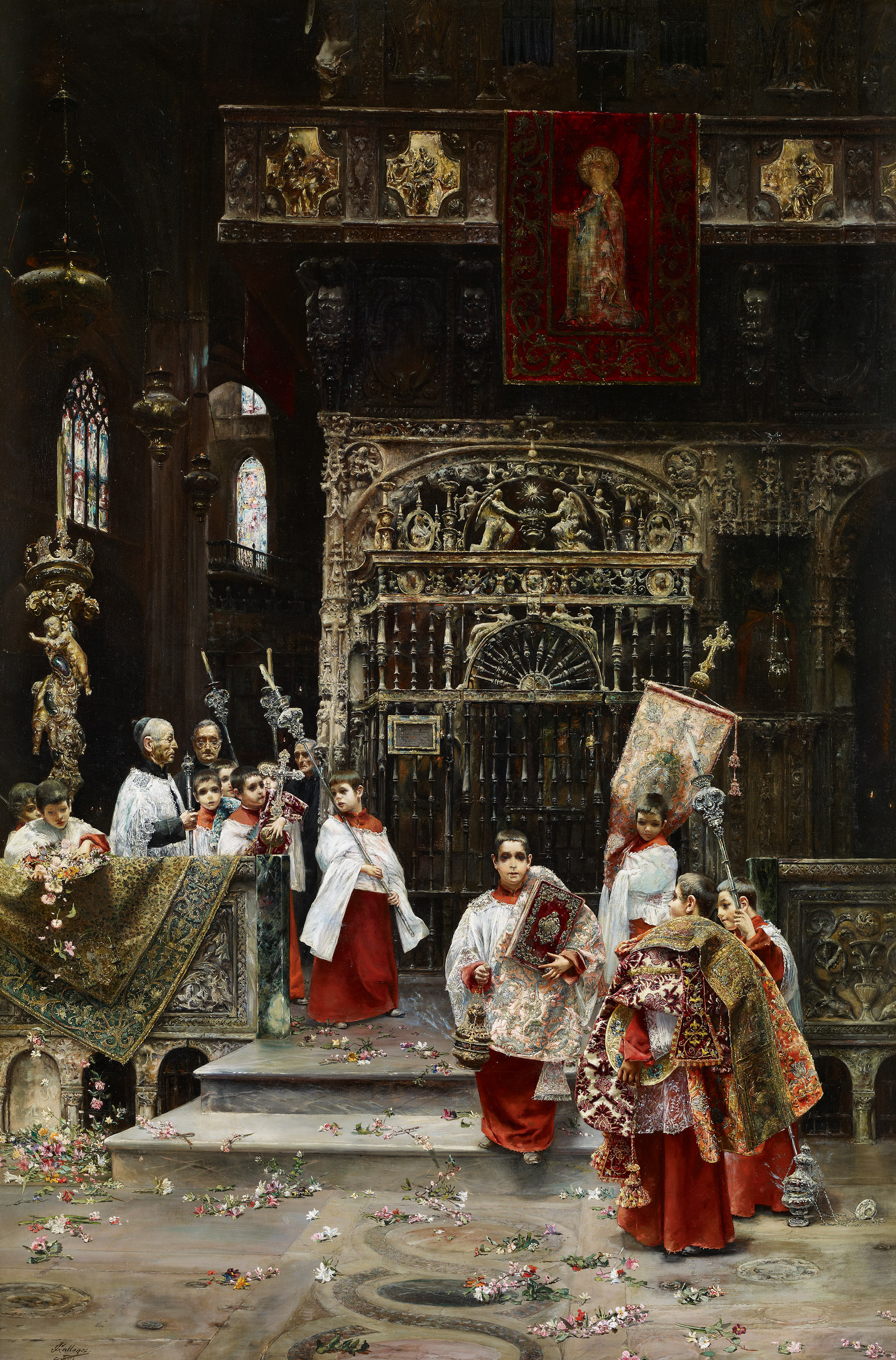 A group of altar boys approaching the spectator almost diagonally, carrying objects from the processional liturgy, is complemented by another group of sterner-looking clerical figures. All are framed by the choir of a church brimming with ecclesiastical and liturgical furniture full of artistic references (in other works of this type easily recognisable), from the Gothic stained-glass window to the goldwork of the crosses and candelabra and the Renaissance rood-screen. That screen is virtually identical to the one featured in another very similar tableautin – El coro ("The Choir") – and it was not precisely to do research for this type of painting that Gallegos visited the churches of Rome, Assisi and Venice with his compatriot and friend Salvador Sánchez Barbudo (1857–1917). However, here the stained glass is achieved with daubs of colour without specific outlines, in the same way as the children's faces display a certain ugliness due to the fact that their eyes are shrouded in shadow. Whatever the case, the dark upper area of the canvas forms a sharp contrast with the brightness of the reds and white of the boys’ vestments. Most evident of all, however, is the fact that the qualities of the objects themselves, the lustrous fabrics and metal sheens served the painter to achieve that "irreproachable virtuosity" then attributed to him as a faithful follower of Fortuny. Furthermore, the term "sacramental works" must be added to describe this kind of picture – not for the religious theme but for the depiction of interiors and special feast days in the Roman Catholic calendar.

Such a designation is more elevated than that of "monaguillismo", which Gaya Nuño applied with such quick-witted derision (still encumbered with prejudice against certain kinds of 19th-century aesthetics) to a trend that is said to have managed to relegate religious painting to the level of pictures of pure, angelic, altar boys full of grace. This type of painting (a speciality of many Spanish painters in Rome) was often said to be in the "dress coat" style, i.e. with early 19th-century Goyaesque figures reflecting Fortuny's neo-Goyaesque aesthetics.

Attempts to date works of this kind to the second half of the 1880s are further aided by the information provided by reproductions in contemporary illustrated magazines. The best-known, La Ilustración Española y Americana, reproduced a print entitled Un bautizo a principios de siglo (“A Christening at the Beginning of the Century”) with a text describing its wealth of detail, ornamentation and artistic accessories and concluded that it is a painting in which the principal scene is actually eclipsed by the beautiful perspective of the setting and the accessories themselves. As an example of genre themes, the same magazine also reproduced Ante las reliquias de san Francisco de Asís (“Before the Relics of St Francis of Assisi”) adding6 that such worship in the crypt of il santo convent in Assisi was customary. But over and above all, it reproduced Botín de Guerra (“War Booty”), which, in addition to illustrating another précieux trend – Orientalism – (culminating in a trip to Tangiers in 1879 mentioned in Gallegos's biography), was awarded – as the text to the illustration hastens to mention – a medal (third-class) at the 1884 National Exhibition of Fine Arts.