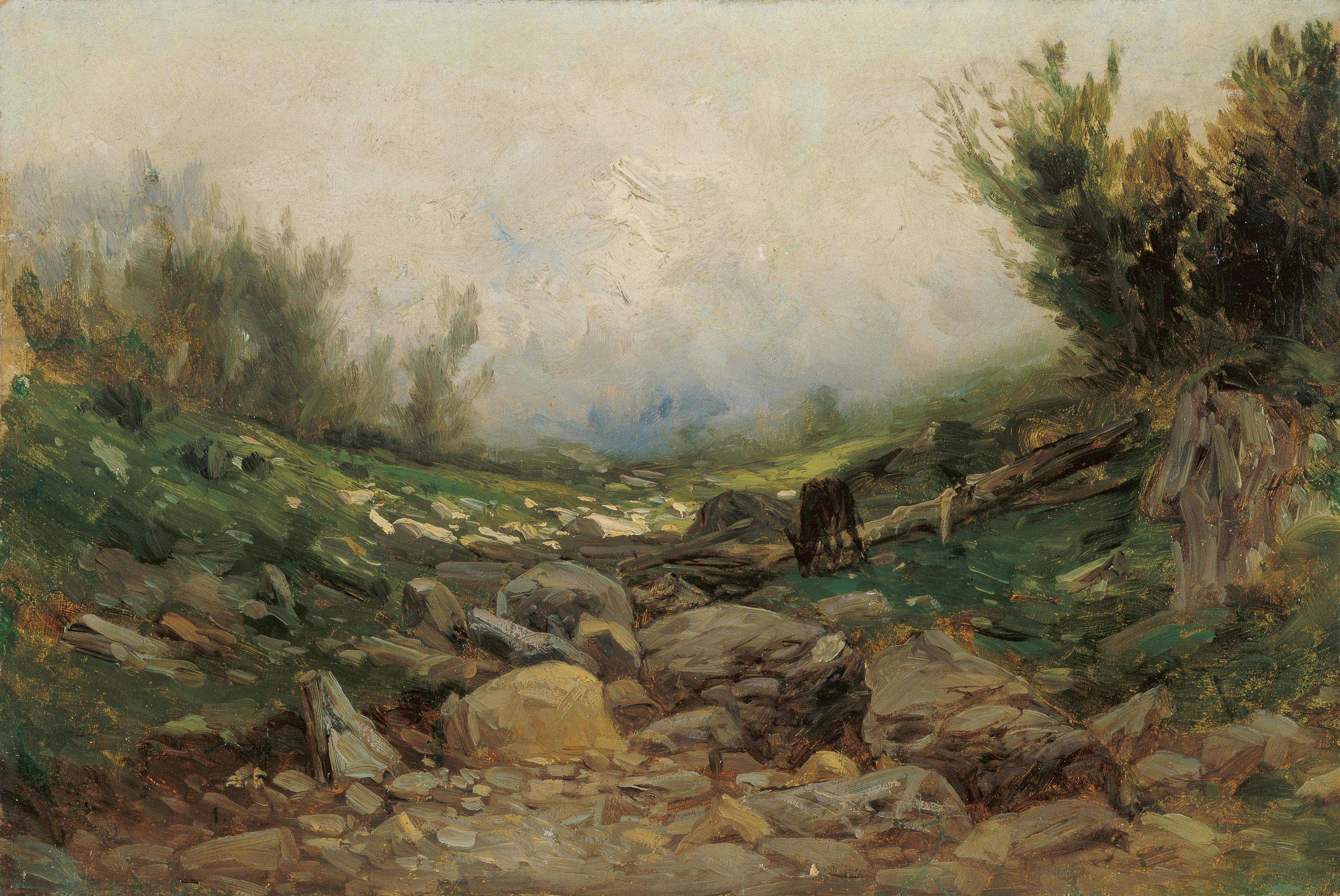 Thick fog rolls down a mountainside, licking at trees and stones as it advances towards the foreground, where a donkey grazes among rocks and fallen tree trunks.

Although the Museo Carmen Thyssen Málaga Collection already possesses two spectacular panoramic landscapes by Haes from his early mature period,1 this small picture reveals a more modern and authentic facet of the great 19th-century Spanish realist landscape master. From his chair at the San Fernando Academy of Fine Arts in Madrid, he revolutionised the teaching of the genre, urging his pupils to leave classrooms and workshops and go out to capture directly from life itself nature's different elements, its atmospheric effects and the effect of light on the geographical features of the open countryside or the mountains. His hope was thus to banish forever Romanticism's bad habit of producing fanciful, studio-painted landscapes, figments of the artist's imagination reconstructed in an orderly fashion from sketches (methods, nevertheless, discernible in de Haes's own earliest landscapes).

It is logical that this new method of painting landscapes should, on the one hand, compel artists to turn to small, light supports that could be carried around with paints and brushes in briefcases and which were particularly convenient, bearing in mind the brevity of the sessions. Therefore small-sized canvases or, as in this case, paper or cardboard were preferred.

In the classroom, on the other hand, de Haes enumerated the essential qualities of the true landscape painter: he should be capable of perceiving instantly and with total accuracy the most useful nuances offered him by nature’s constant transformations – in the sky, the weather or the ever-changing sunlight. This would entail very rapid sessions, with the artist's attention centred, for example, on small areas, fallen tree trunks or streams, and capturing them with total spontaneity and freshness of execution in the form of small paintings like this one. In the field of contemporary Spanish landscape painting, it was an absolutely new artistic idiom. This procedure explains how, in addition to the Belgian master's more well-known large canvases, Carlos de Haes's truest, most interesting production is found in the countless small-format works he painted in the course of his life while on his constant travels through different parts of Spain and elsewhere in Europe. Indeed, at his death he bequeathed the more than two hundred such pictures in his possession to his beloved pupils. This painting is an eloquent example of that kind of work. It was achieved in an extraordinarily brief, concise way, the straight brushstrokes applying the thick paint in direct energetic dabs leaving broken outlines. All of this reflects an astounding degree of self-confidence betrayed neither by insistence nor hesitation which enabled him to model the different elements of the landscape through large planes. As that technique was very characteristic of the artist's most personal style at a very specific stage in his production, this picture can be accurately dated between 1872 and 1875, when de Haes was travelling in the Picos de Europa and Alsasua regions.

Despite the swiftness of the execution – probably no more than an hour – de Haes here displayed his absolute mastery of all the landscape painting techniques. With astounding veracity he captured the unpleasant sensation of cold on the mountain, the dampness of the grass, the blinding ray of sunlight cutting across the stones in the middle ground, and the thickness of the fog as little by little it swallows up the trees and the rugged terrain disappears as if a curtain has been drawn over it. And all the while, the clouds allow the vague outlines at the summit only to be guessed at.