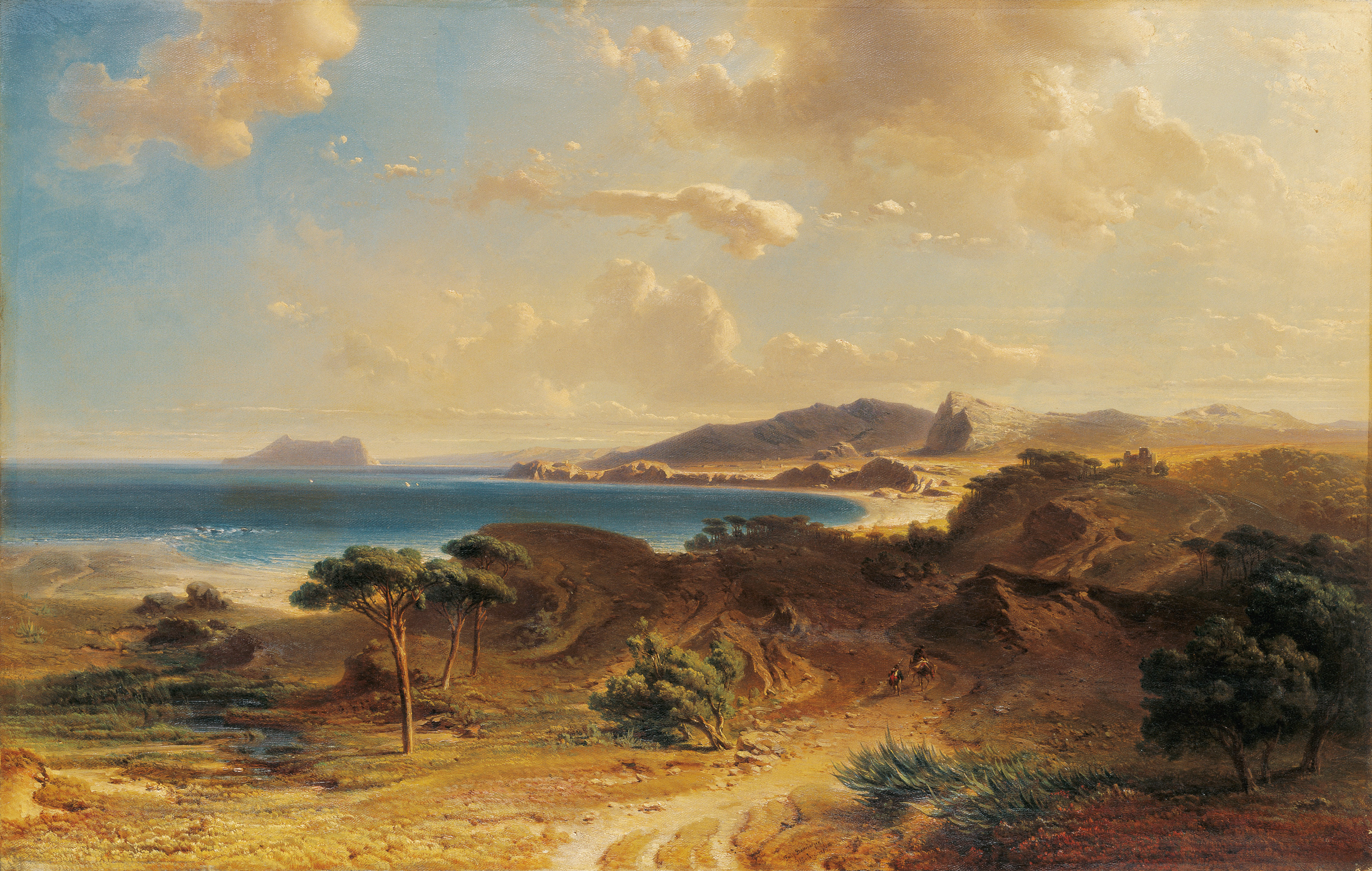 Beach at Estepona with a View of the Rock of Gibraltar

Painted by Bamberger in Munich after his second trip to Spain, the painting is a combination of various views of the southern coast of Spain from the beach at Estepona in the province of Malaga to Gibraltar in the distance, dominated by its rock. It is therefore not a topographically accurate view but rather the recreation of the monumental effect, through its breadth and impression of spatial depth, of the westernmost part of Spain’s southern coastline. It is a sort of quintessence of that vast terrain which includes mountains, dunes, marshes, beaches and cliffs and on whose horizon is clearly silhouetted the Rock of Gibraltar.

Gibraltar was one of the most famous natural features of the Iberian Peninsula. From the 1770s it was studied by British geologists and it was a frequent subject for view painters and illustrators. Bamberger adopted it as one of his favourite, and probably most popular, subjects. By 1851 he had already exhibited in Frankfurt a View of Gibraltar which he painted on his return from Spain in 1849. He repeated the subject on numerous occasions. The Neue Pinakothek in Munich houses an oil painting executed by Bamberger in 1859 entitled Mountainous Landscape on the Spanish Coastand featuring numerous elements taken from the landscape of the Bay of Algeciras and the area around and including Gibraltar. In addition, the Schackgalerie in Munich owns a View of Gibraltar painted in oil in 1863 and bought by the Graf von Schack that same year. This work depicts sunset in the Straits of Gibraltar with the outskirts of Algeciras in the foreground and the Rock in the background. The Nelly Louise Luckenbach Collection in Heidelberg also owns a View of Gibraltar painted by Bamberger in 1865.

The arrangement of the various elements in Beach at Estepona with a View of the Rock of Gibraltar is quite similar to the above-mentioned paintings, but here the sea opens out on the left-hand side rather than on the right of the composition as in the Munich canvases. The sublimation of a spectacular geographical feature, in any event, provides the link between this and other paintings by Bamberger. This does not mean to say that the original appearance of the landscape is depicted with total accuracy. Certain aspects are exaggerated in his works, such as the depth of the visual field, which is particularly developed in the painting in the Carmen Thyssen-Bornemisza Collection.

The present painting, dominated by its horizontal layout and the choice of a very high viewpoint, shows a panoramic view of a fragment of nature which is the result of combining numerous elements characteristic of the Andalusian coastline. The artist creates a majestic view of the Mediterranean sky and the strength of its light and its transparency, which enhance the landscape of the foreshortened coastline that extends into a space as immensurable as it is in reality. Colour, light and the vastness of the Mediterranean landscape in its virgin state are undoubtedly the true subjects of this Romantic painting. By using devices such as various planes which are not continued into the background, a combination of very high viewpoints for the land and very low ones for the sky, and contrasts of light, the artist succeeds in conveying the experience of the place, expressed in monumental terms. There is a literary and not just an emotional intent to Bamberger's imposing landscapes, as the Graf von Schack noted in connection with the View of Gibraltar which he bought in 1863: "Even someone who has never been there and does not know the place feels himself transported there by such a work of art, if one allows oneself to be steeped in its influence in the right way. In Bamberger's Gibraltar one can look down from above the steep rock to the blue below, between which two seas move between the Pillars of Hercules […]."There is a striking relationship between these paintings and those of the Greek coastline by Rottmann, and this painting and other landscapes by Bamberger can be interpreted as a transposition of the poetic formulated by Rottmann in his painting of Greece to the depiction of the Spanish Mediterranean. The artist seeks similar sympathies with a landscape which is certainly wild but also historic. It is as if the presence of architectural elements and of the picturesque figures were invitations to reflect on the landscape in its present and past.

Beach at Estepona with a View of the Rock of Gibraltar