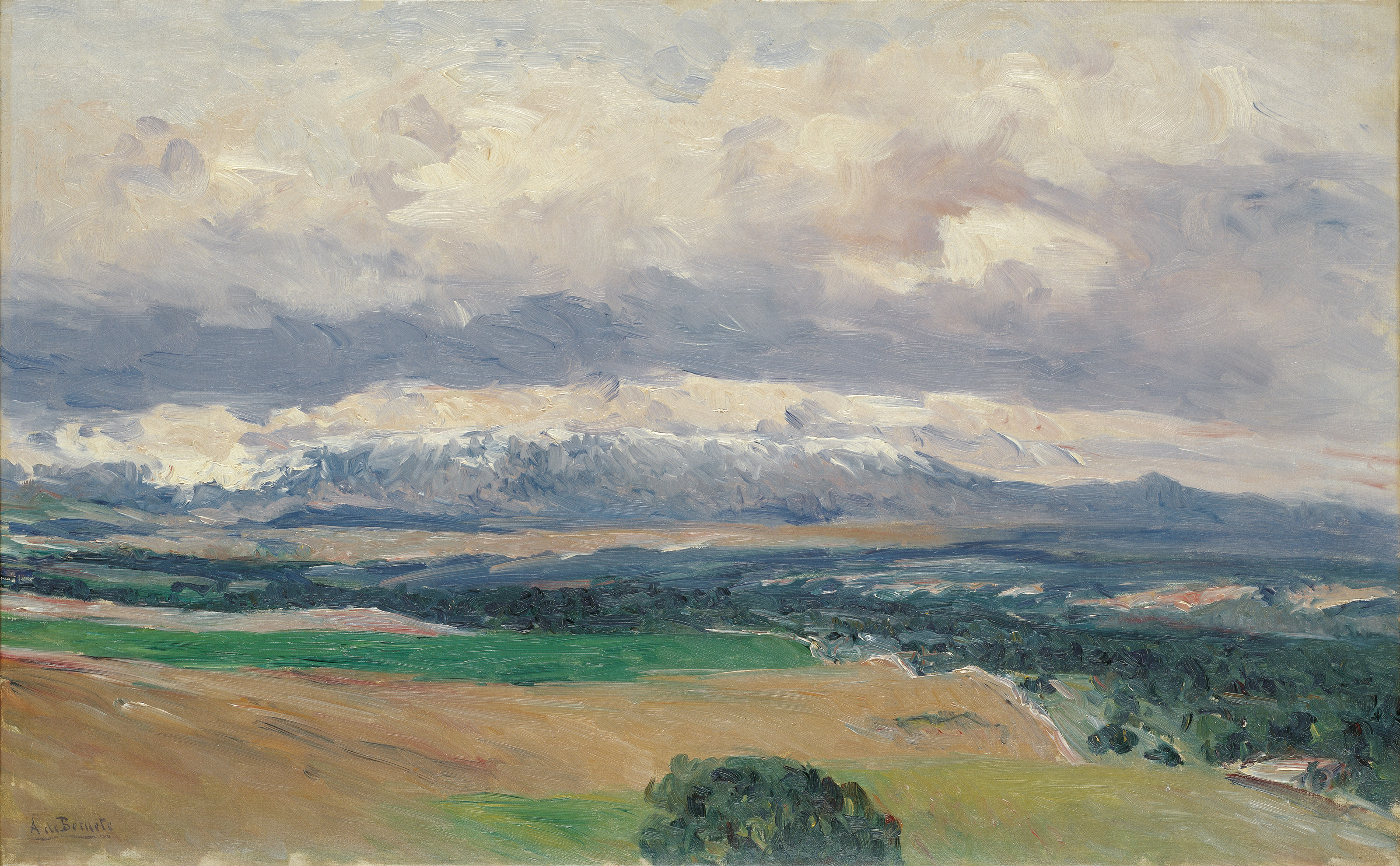 View of the Sierra de Guadarrama from El Plantío

This canvas features a view of the Sierra de Guadarrama mountain range on an overcast day with clouds hugging the snow-capped peaks. In foreground, wide green meadows give way to an area that is clear of trees.

Of the Castilian landscapes painted by Aureliano de Beruete – one excellent example is a view of Avila of 1909 in the Museo Carmen Thyssen Málaga Collection – it is clear that from a very early period Guadarrama and the area known as the "poor mountains" of Madrid were among this great painter's favourite places. Beruete's canvases are exceptional, eloquent testimonials to the movement that appeared around the end of the 19th century at the Free Teaching Institution, which advocated a revival of the genuine values of the ways of life in the villages close to Madrid, as opposed to the affected, inane materialism of the capital. Beruete himself played an active role in this movement with his drama Entre rocas ("Among Rocks"), set in the rural society of the Spanish mountains and first performed at the Teatro Española in Madrid on 15 January 1900.

As is customary with Beruete, this landscape of splendid quality with an extremely simple compositional arrangement is formed by large bands, with the canvas divided in two by the horizon. Equal expressiveness is assigned to the changing swathes of colour of the plains and the bright intensity of the sky. Beruete achieved this through a vigorous technique using broad, thick layers of impasto which merge with the whites and blues of the mountains. These colours are interpreted with a totally free touch, making the different elements of the landscape indistinct and condensing them into strokes of pure light and colour of astounding visual sharpness.

Beruete seems to have been particularly fond of setting up his easel at this location, with the mountains viewed from El Plantío de los Infantes, as there are many paintings devoted to this area in the province of Madrid. View of the Guadarrama, painted in 1905 at exactly the same point, is one example, although the angle is somewhat wider3 and rendered on a clear day with the various landscape elements much more closely defined. Furthermore, in yet another version – View of the Guadarrama Mountains, presented to the Hispanic Society of America4 by the artist's son in 1912 – the viewpoint is extraordinarily similar.

The painting is still in the original frame, itself identical in design to those containing similar views painted by Beruete and exhibited at the posthumous exhibition dedicated to him by his close friend Joaquín Sorolla. Number 210 at that exhibition was a study of The Guadarrama mounted on panel; it was shown with another ten dating from between 1900 and 1902, although it would not appear to be the canvas – much more than a mere study – discussed here.

The landscape must have been painted early in 1901, as in May that year Beruete was travelling in Europe, staying at Saint-Jean-de-Luz, Nantes, London and Quimperlé (Brittany) and returning to Madrid for a few days at the end of September before going on to Toledo.

View of the Sierra de Guadarrama from El Plantío