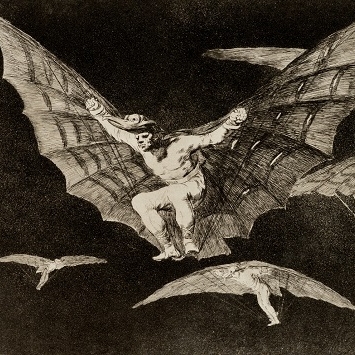 
This enthralling intense dialogue between Francisco de Goya (1746-1828) and the Belgian artist James Ensor (1860-1949), two of the greatest universal masters of printmaking, begins with a selfportrait of each. They are images of the artists whose fantasy gave rise to the prints on view in this exhibition – the result of whimsical, nonsensical, impossible and irrational dreams inhabited by winged figures, masks, skeletons and grotesque beings, underlying all of which is an allegorical reflection on the human condition.

Presented as bizarre products of the imagination, their references transcend the specific reality of both masters’ contemporary societies, becoming timeless and universal. They are visions that appeal to spectators’ sensitivity, using satire or mockery to confront them with denunciations that are still relevant today; with their own perception of the world of dreams and nightmares; and with something as human as not wanting to look but not being able to help doing so.

The show brings together 53 masterpieces, lent by the Museo de Bellas Artes of Córdoba and a private collection, from the dream images produced by Goya and Ensor as printmakers, which are unquestionable points of references of modern art today. Ahead of their time, both artists marked a milestone in the defence of creative freedom and art’s critical commitment to society, and in creating personal languages that foreshadowed 20thcentury expressionism and surrealism.

Go back to Catalogues