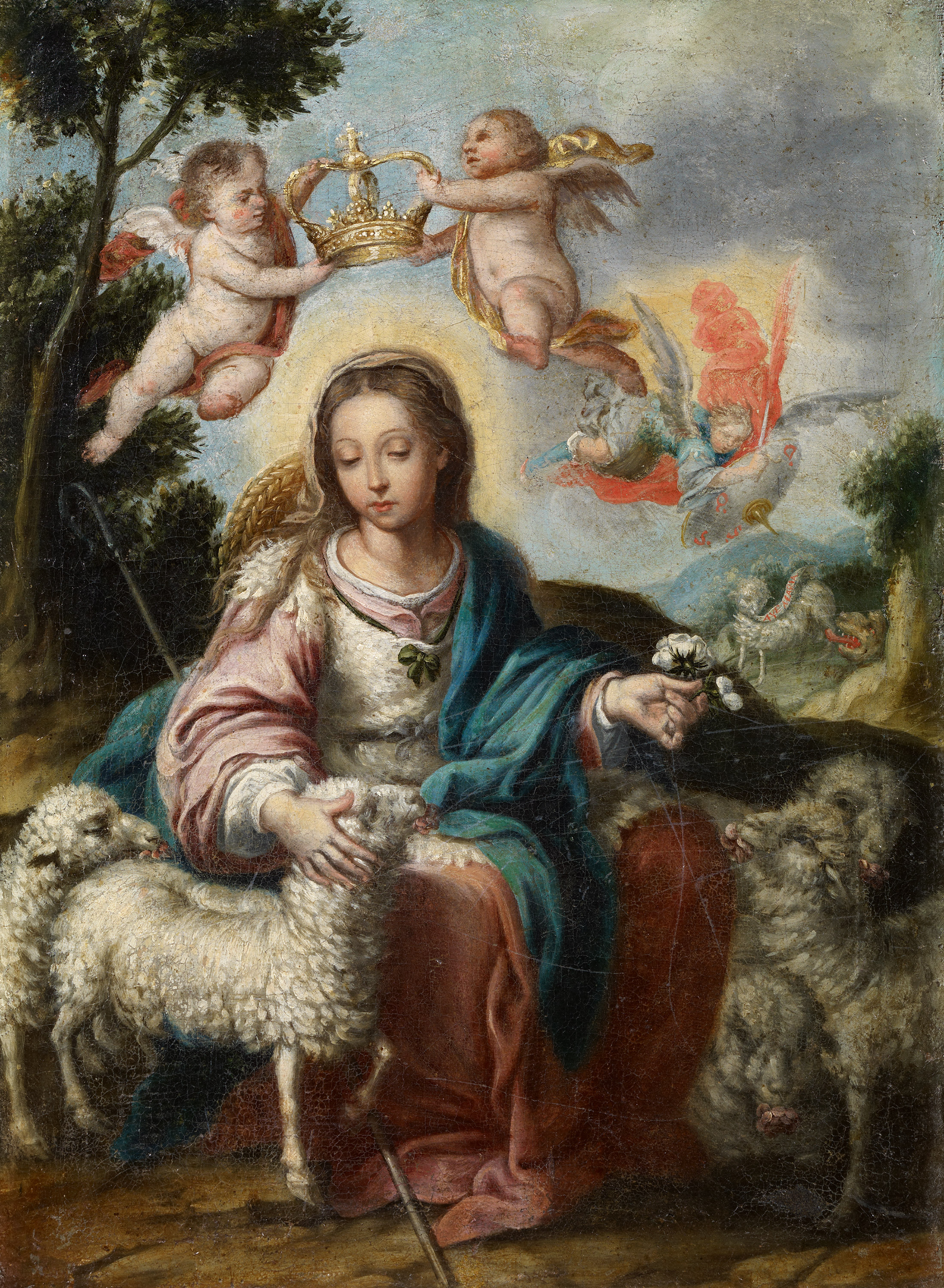 This small painting on canvas, which is neither signed nor dated, appears to be one of the works produced by the artist’s studio in response to widespread demand for an iconography that became very popular in Seville at the beginning of the 18th century. The theme of the Divine Shepherdess is one of the few truly 18th-century contributions to the iconography. It was Tovar himself who defined it in 1703, on the instructions of the Capuchin monk Brother Isidoro of Seville (1662–1750). It is likely that this new devotional figure stemmed from the wish to create a Marian image that was suited to processional worship and easily related to the mentality of the day.

In accordance with Brother Isidoro’s description, the Virgin is seated on a rock wearing a veil and a straw hat. Dressed in a red tunic and blue mantle – a clear allusion to the clothing of the images of the Immaculate Conception – she sports a white sheepskin typical of a shepherd’s attire secured with a knot at her waist and carries a staff; these two attributes are both linked to the prevailing bucolic atmosphere of the scene. A group of sheep, representing believers, surround her and eat from her hand the roses that symbolise the prayer of the Holy Rosary. In the background one of them, which has strayed from the flock, is threatened by a fierce animal, an image of evil and sin, at which it brandishes a cartouche bearing the inscription “AVE MARIA” in order to invoke the help of the Virgin. She sends divine protection in the form of the archangel St Michael, who is armed. Although not initially, Brother Isidoro of Seville also asked the painter to incorporate into this iconography the image of the two angels holding a rich crown above the Virgin’s head, indicating her status of Universal Queen.

The public presentation of this new representation of the Virgin took place on 8 September of the year of its creation – i.e. 1703 – when a standard depicting this theme was first used in the procession of the Rosary which, after departing from the church of San Gil in Seville, headed for the Alameda de Hércules, where Brother Isidoro explained the new Marian devotion to the people gathered there. Established and developed chiefly in Seville, it spread from there to the rest of Spain and the world, especially South America. The Capuchin order appointed the Divine Shepherdess patron saint and protector of its missions on 8 May 1798.

The iconography is highly suited to the mentality of the time and perfectly in keeping with traditional language, which had been familiar with the Baroque depictions of divinity since the previous century. It brings to the figure of Mary the Christological epithet of the Good Shepherd, making her a shepherdess of souls which she saves from evil, as conveyed by the stray sheep in the background whose devotion to the Virgin earns it her protection and the help of the archangel St Michael, who is precisely entrusted with weighing souls on his scales during the Last Judgement.

The style of Tovar’s religious compositions, which underwent little evolution, remained closely linked to the art of Murillo, whom he followed, imitated and copied. Borrowings from Murillo include his delicate, beautiful female model, its elegance and serenity and the delicacy of his palette, as can be seen in this painting, which is a good example of a group of works on this theme that are based, with very few variations, on the model established by the Sevillian friar. It is not known for sure which of these is the earliest example. A copper miniature dating from about 1703 belonging to the Capuchin Friars Minor of Seville is similar in composition, models and colours to those of the present painting. The same is true of the watercolour in the book of rules of the brotherhood of the Divine Shepherdess and St Marina, Reglas de la Hermandad de la Divina Pastora y de Santa Marina, and the painting of the standard, both of which are dated to around 1732.

These paintings and the many that belong to churches and museums are difficult to date owing to their great similarity – they are all based on a standard model – and the little evolution in the artist’s style, but it is likely that the present work was executed around the 1720s. The depictions of the theme dating from the following decade onwards appear to prefer a simpler narration with fewer anecdotal details, even dispensing with the crown-bearing angels, and a more monumental conception of the figure of the Virgin. This is borne out by one of his few signed and dated works, the Divine Shepherdess in the parish church of Cortelazor (Huelva), of 1748, and by a painting of about 1740 in the Museo del Prado, which has been attributed to Bernardo Lorente Germán in the past and which several scholars now believe to be by Tovar.