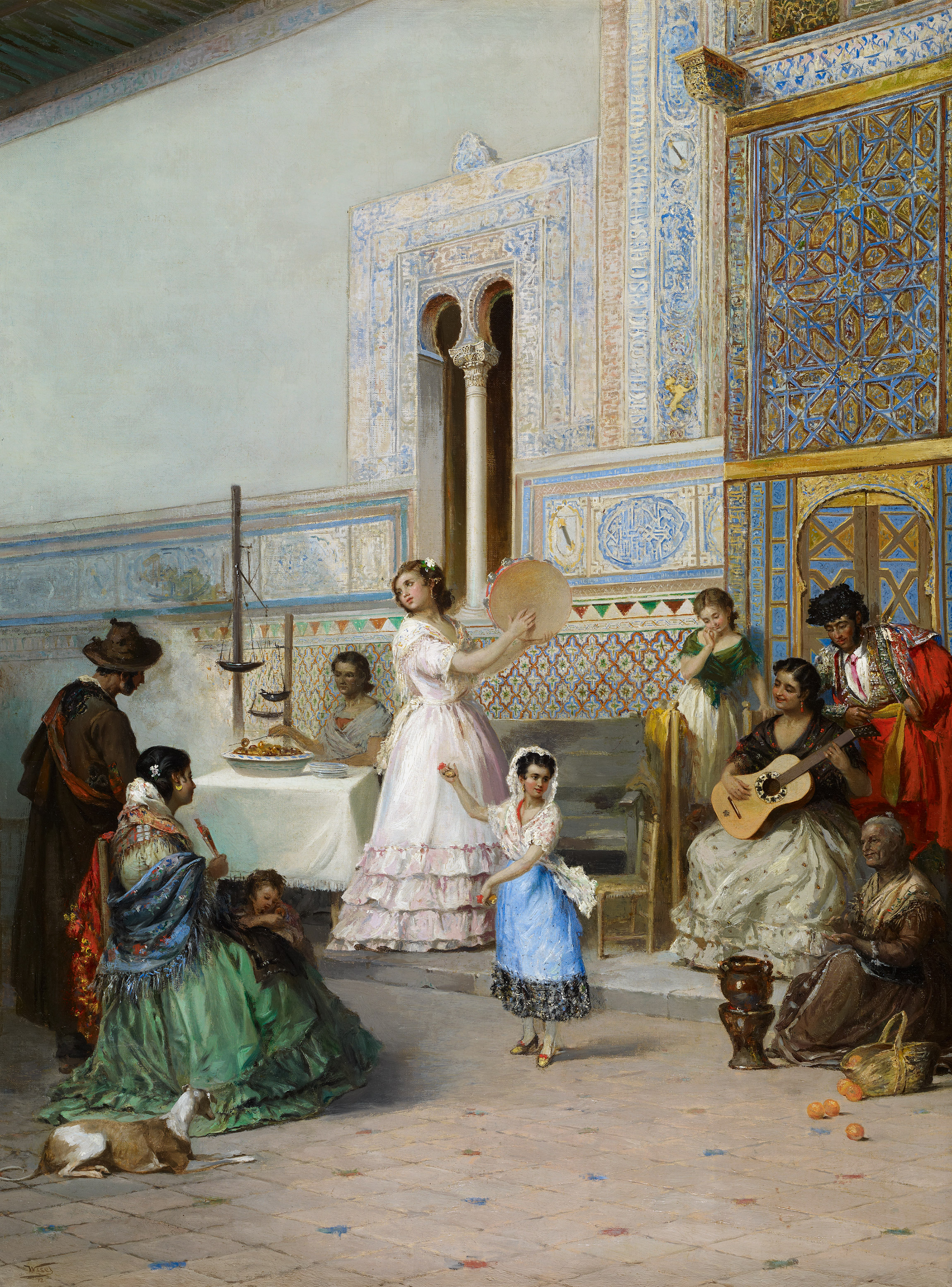 Genre Scene at the Alcázar of Seville

Although the work came onto the market as Rincón granadino (“A Corner of Granada”), it in fact depicts the north side of the courtyard of the Doncellas in the palace of Rey Don Pedro in the Alcázar of Seville, which was lavishly decorated with Mudéjar tiling and plasterwork. On the right of the painting are the painted and gilded doors of damascened pinewood, crafted in Toledo, leading to the Royal Apartments. The artist takes certain liberties in his depiction not only of the intricate ornamental motifs but also of the purely architectural aspects. For example, the difference in the level of the flooring is not located where the painter shows it to be but actually between the corridor and the courtyard, which is not featured in the painting. The mullioned window is much lower than depicted and the painter has changed the shape of the arches and eliminated the cymatium of the slender column.

The painting is therefore not a faithful rendering and differs in this aspect from the versions of the same theme produced by other artists who were attracted by its beauty, such as Joaquín Domínguez Bécquer; from the engravings and lithographs – of which the composition that most resembles the present painting is that made in 1863 by Friedrich Eibner; and from the views of many photographers, among them Francis Frith, Charles Clifford, the Count of Vernay and Jean Laurent. On the contrary, the present work is aimed more at providing a richly ornate background to frame a scene of the type depicted in numerous examples of Sevillian genre painting. Wssel used a similar architectural setting in a few other paintings as a backdrop to everyday scenes of Moresque life, in accordance with the Orientalist trend popularised by Fortuny in Spain during those years. In all cases, the works were aimed at an English-speaking clientele, as revealed here by a label glued to the reverse indicating its title to be Street-dancer in Granada.

The painting brings together a skilfully composed set of what are very common motifs in this genre, linked by the flamenco dancing that never failed to attract visitors to the city. Arranged around the girl who dances and plays the castanets and the two girls who play the guitar and tambourine are the rest of the figures, among them a bullfighter attired in his costume and an old gypsy woman who claps her hands seated by a glazed earthenware pot on a portable cooker on which she prepares a stew, and a basket of oranges. In the background a seller of buñuelos, seated at a table with a pair of scales for weighing the fritters, threads one onto a stick. The fritters ready to be sold lie on an earthenware dish, possibly from Triana. At the same time, she fries another batch, as indicated by the smoke on the left.

To enliven the composition the artist lays out three groups of figures diagonally. Although there are obvious flaws of draughtsmanship in the buñuelo seller and in the girl, who is disproportioned, other figures who have the self-engrossed appearance characteristic of the painter are very beautiful. The colouring is arranged so that the lightest tones are in the centre, while the darker silhouettes of the figures imbued with most character, the gypsies on the left, stand out powerfully against the background. The execution is very careful in some figures, such as the dancer with the tambourine, but weaker in others like the buñuelo seller.

Considerable prominence is given to the women’s outfits of flamenco dresses and shawls – in the case of the girl a lace mantilla – and coral or gold earrings. Their rich range of enamel-like colours is characteristic of the paintings of this artist, who was influenced by Fortuny, with whom he was in close contact in 1870. In this work he displays his fondness for cold blues and violets with a “washed” or watercolour effect which lend the painting an elegance that must have greatly appealed to English tastes.

Genre Scene at the Alcázar of Seville