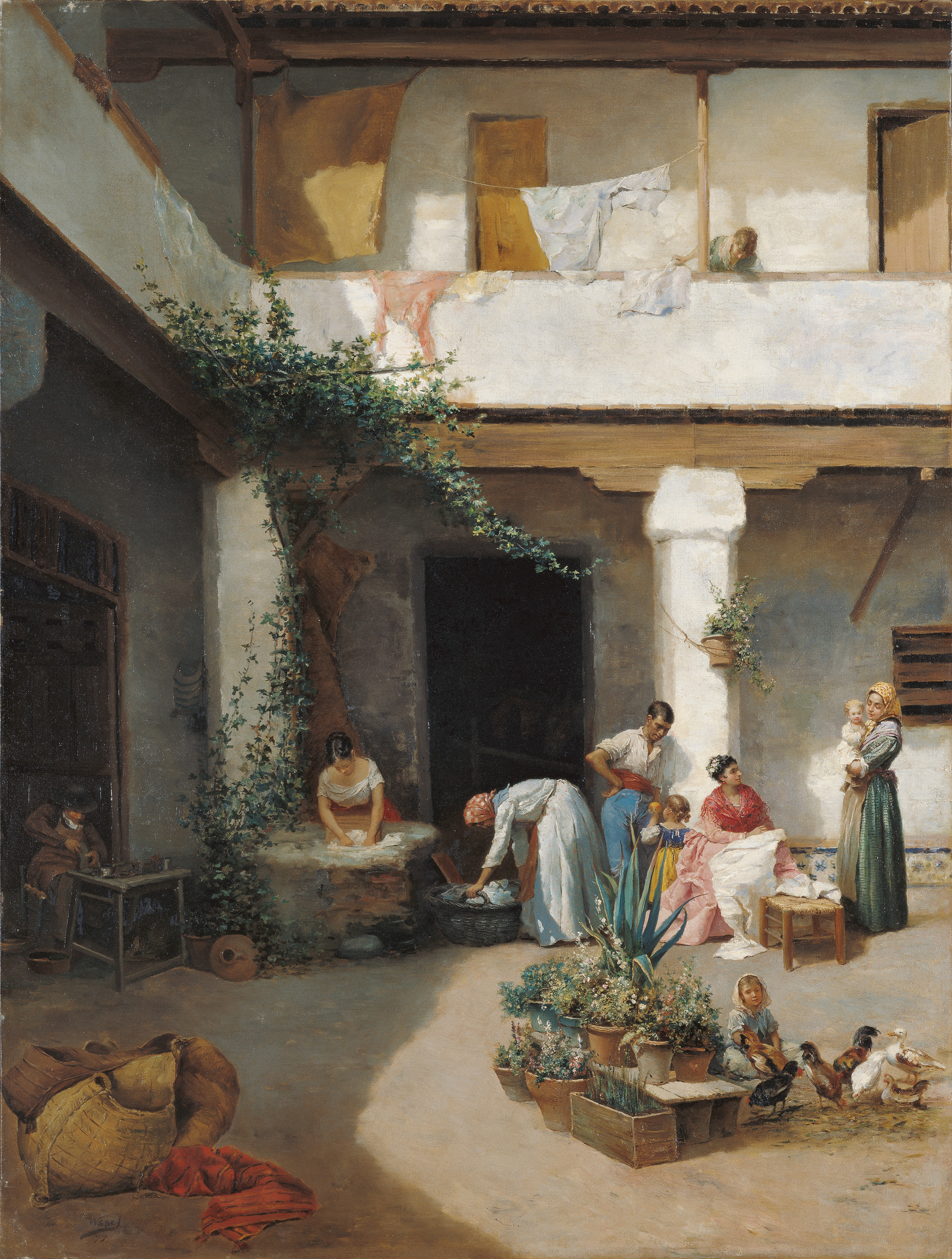 Washing in the Courtyard

This painting entered the collection as the companion piece to Rosquilla Sellers in a Corner of Seville, with which it forms a pair on account of its format, theme and layout, despite being painted four years earlier. Both paintings are an excellent example of Wssel’s finest picturesque genre scenes, which are nearly always set in Andalusia, specifically Seville, where he lived for several years.

Known above all as a portraitist and painter of religious scenes and mural decorations and mainly life-size figures, executed according to the strict academicism of the last decades of the century, this interesting artist rarely achieved more than middling results in these genres. In contrast, he was much more skilled at attractive folk scenes of this kind, which are generally his most interesting works.

The present painting depicts a peaceful family scene in a sunny communal courtyard in Seville. A young woman washes clothes in the basin located in a corner, while her older companion brings her a basket of clothing. Beside them a family with their children lean against a post basking in the sun, watched by a neighbour from the upper corridor. The man pays attention to his daughter, who shows him an orange, while the mother has just handed her young son to a neighbour or servant. In front of them a seated girl is fascinated by the chickens and ducks eating next to a bench piled with pot plants, prominent among which is a pita. An old-fashioned cobbler is at work in the shade. The saddlebags and tack of a horse are visible in the foreground.

Despite the simplicity of the theme, the painting attests to Wssel’s skill at genre painting. It displays highly personal traits that set him apart from the legion of very diverse artists who embraced this type of painting during those years on account of its great popularity with bourgeois customers owing to the appeal of its anecdotal themes and the vivid colours that made it highly decorative.

The considerable presence and size of the setting are unusual for this genre. The artist gives the sober architecture of the courtyard with its simple wooden beams and whitewashed walls a prominence that is enhanced by the size of the canvas and overpowers the figures, who appear smaller in size.

Nevertheless, it is in the figures that Wssel logically displays his particular talent for narrative, despite the everyday nature of the scene, and his keen eye for detail in the careful observation of the different folk types. Indeed, his success in this genre was largely based on these depictions, in which he exhibits a much more supple and refined technique than in his paintings featuring large figures that are nearly always somewhat lacklustre. In people such as the seated girl – without a doubt the most delightful figure in the entire composition – and in objects such as the leaves or the climbing plant and the flowerpots, Wssel reaches heights of virtuosity, painting them almost with the tip of the brush with the exquisiteness of a miniaturist. He furthermore skilfully depicts the backlighting provided by the blinding sunlight that falls on the courtyard, achieving impressive effects such as the sunlit branches of the climbing plant silhouetted against the darkness of the background entranceway.

Despite the vagueness of the title, this could be the painting En un patio sevillano (“In a Seville Courtyard”) whose whereabouts is referred to as unknown in literature.

Washing in the Courtyard