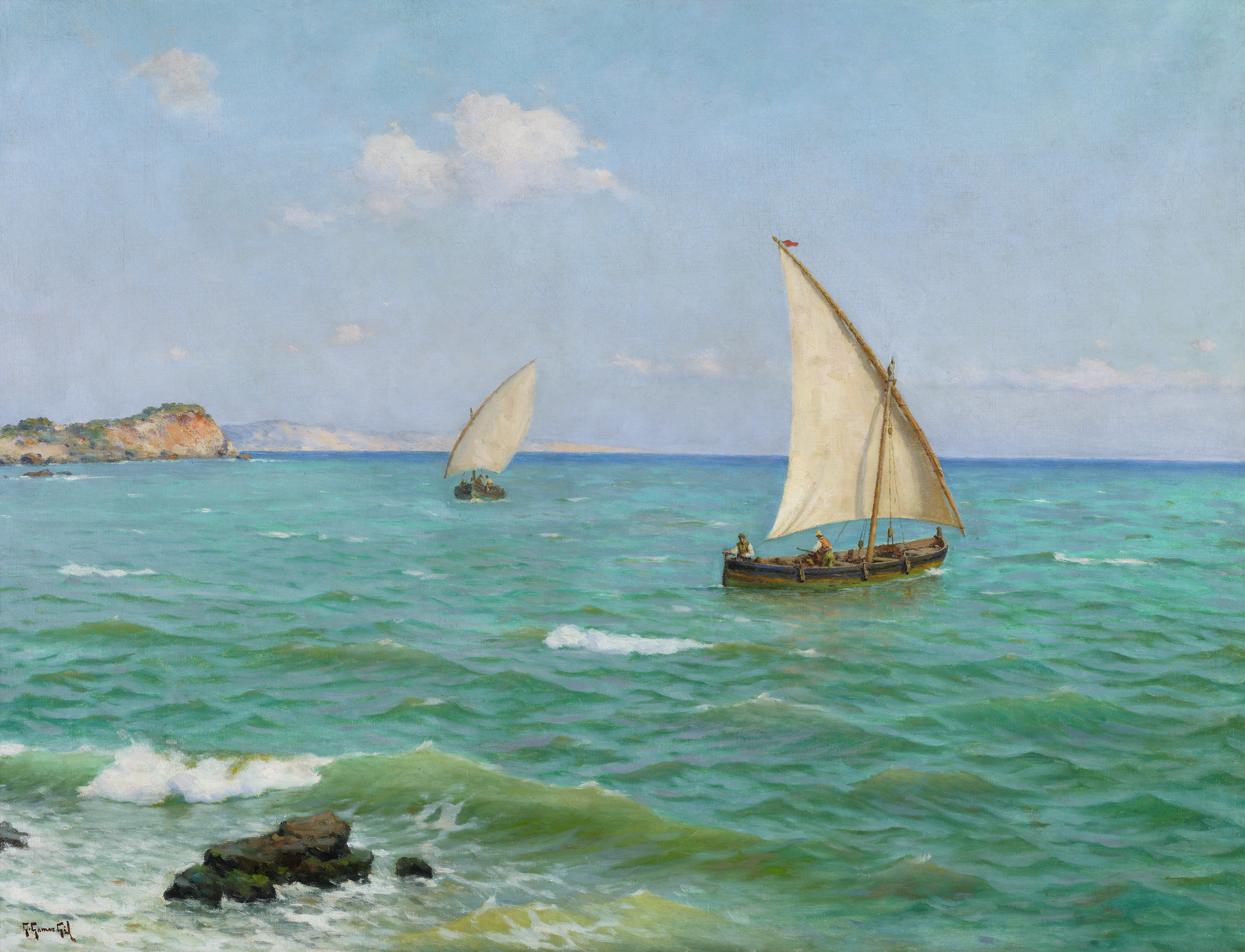 Guillermo Gómez Gil dedicated a good part of his production to landscape painting, particularly in the form of seascapes.

From the very beginning the artist turned his attention to the sea and the coasts of Malaga. In this respect, one fine example is a painting of 1880 which he presented at an exhibition organised by the Malaga City Council that year. Subsequently purchased by the Council, today it is exhibited in the Museo del Patrimonio Municipal ("Museum of Municipal Heritage").

On that occasion, Gómez Gil literalised the territory and focused on making a precise, sincere record in an eclectic exercise with a realist aim – a decision curtailed by his interest in marking routes on the surface of the canvas and adding typical, clichéd clues to aid identification of the location.

As he progressed in his profession, his desire to be included in the modern fin-de-siècle movements caused him to stop and concentrate on capturing landscapes – especially ones involving the sea – in which, over and above geographical details, the overriding factor was the light, whose effects he amplified in order to produce a line in landscapes which could be associated with poetics such as those of Symbolism.

In this painting he opted for a literal description of nature, with small elements apparently inspired by works by de Haes, as in the rocks emerging from the sea at lower left, and so reminiscent of the Belgian artist's Remains of a Shipwreck (1892), also in the Museo de Patrimonio Municipal. This suggests that Gómez Gil's view is of the coast of Malaga or was inspired by it and its geographical features. Furthermore, the boats are very similar to others in compositions by Ricardo Verdugo Landi and Emilio Ocón.

In short, this painting is skilfully executed with light and colour effects suggesting that the picture was taken directly from life and, moreover, that the spot could well be on the coast of Malaga – or at least might have been inspired by it.

The palette applied to the sea is always important in Gómez Gil's work. He would make every effort to ensure that he was working with a range of greens common to the local coasts, and would use short, precise strokes.

The spontaneity of the work is affected by the narrative, which concentrates on the tasks involved in fishing, the central position of the boats themselves in the composition and the arrangement of the natural elements. Rocks, sea, foam, coast and boats are carefully laid out on the canvas, each occupying a precise space to give a sensation of immediacy and authenticity.

This process of production is not censurable, however, since such methods were applied by landscape painters (most of whom were Spanish by the last thirty years or so of the 19th century and the early part of the 20th century) and guaranteed an accurate, convincing result, even though the nice and pleasant took priority over the unadulterated and literal in the immediate recording of the subject. Moreover, the light, so opportunely applied in this kind of picture, does not become just another object in the painting but is placed at the service of the colour range of the palette and the unifying effect of the work.

Without a doubt, there was a strong demand for marine paintings like this, as they catered for a clientele who not only admired good technique but also liked work that was consonant with the aesthetics associated with the modern movements – although they did draw the line at what they considered too garish or provocative.

In this painting the artist proved himself very professional with a composition which, at first glance, meets the requirements of working directly from nature and, therefore, of fin-de-siècle realism. A closer, more professional look, however, reveals the methods used in its execution and the decision to either continue or finish it in the workshop – thereby stepping back from realism and entering the realm of eclecticism. Nevertheless, we do not view such a decision necessarily in a negative light, since those who chose this way acted with honesty. They maintained the conviction that their duty was to make poetry out of nature by providing a creative view of it rather than a mechanistic one, considering the latter option as more typical of the new technologies (photography) than of art's real function (an open debate between artists and theoreticians in the last decades of the 19th and beginning of the 20th century).

However, there is definitely no doubt of the fact that Gómez Gil's retina was impregnated with the colours of the sea, the sky and the coasts of Malaga, or that he found it easy to transfer these to canvas with all the conviction of a true knowledge of reality.