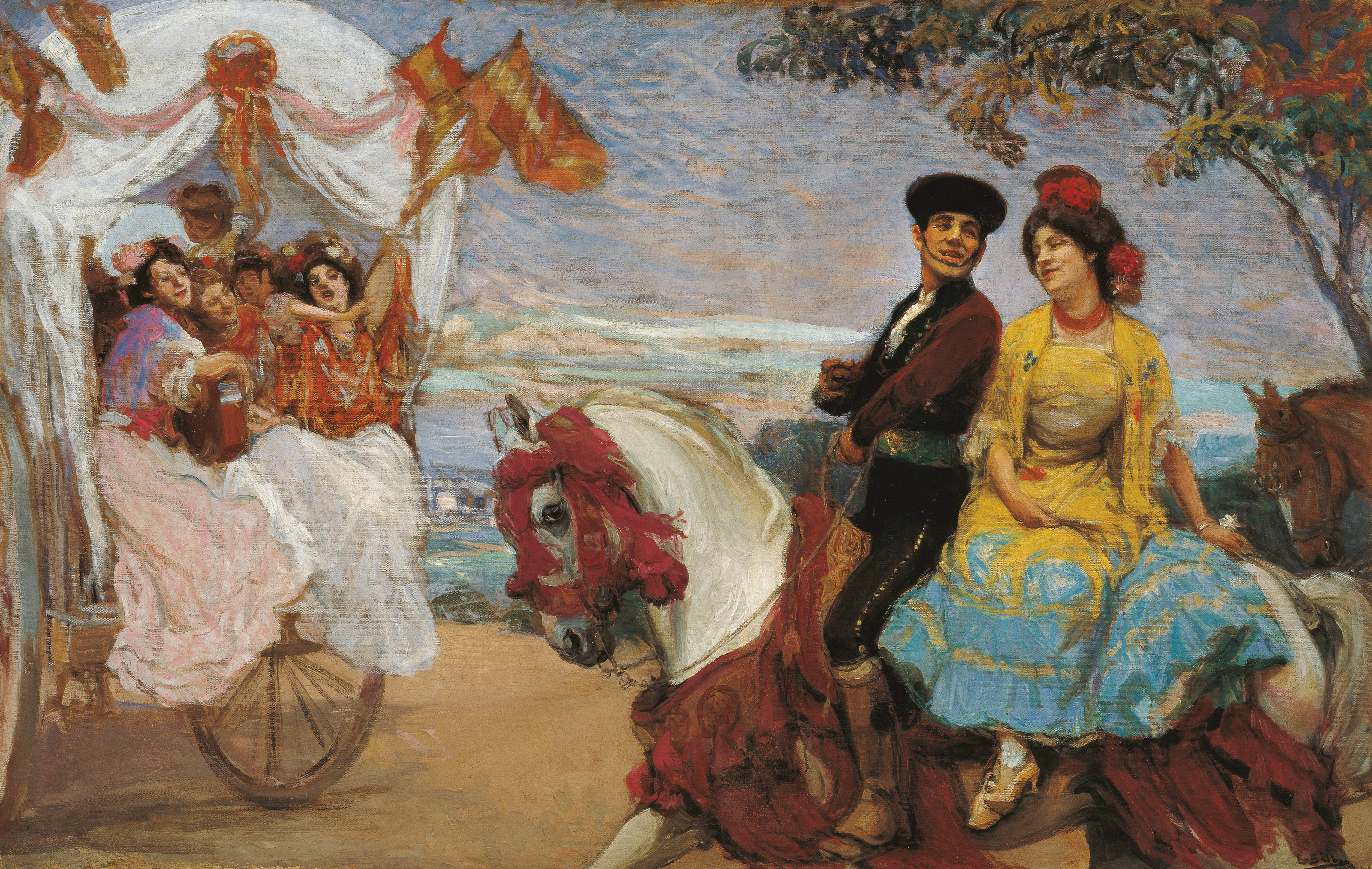 On the Torrijos Pilgrimage

This painting depicts a scene from the popular Torrijos pilgrimage. In the foreground. In the foreground, along a dirt track a couple on horseback follows a wagon decorated with Spanish flags, sashes and ribbons, in which five girls sit and sing as they move to the sound of the guitar one is playing. The young women wear Andalusian silk dresses and shawls of vivid colours and their hair is adorned with carnations. Particularly striking is the dynamism in their movements, in contrast with the serenity of the couple on horseback. The man is dressed in the typical dark Andalusian suit known as the traje corto, a white shirt and gaiters. Glimpsed to the right is the head of another horse as it trots in the same direction towards the Torrijos estate. In the background a landscape of marshland contains a few whitewashed buildings.

Here the pilgrimage provided the artist with the opportunity to capture, in a motif of age-old, deep-rooted, Andalusian tradition, the gay colours of the pilgrims' garments and the richly harnessed horses, the light shining on the sheets, dyed in soft colours, that are draped over the carts, and the movement of the girls to the music. Bilbao produced a large number of paintings with this theme and in his final years is known to have worked on one that was to be a compendium of his previous pictorial experiences with the motif, although he was never to finish it. In this painting, the motion in the scene is accentuated by the long, vibrant brushstrokes forming the sky in the pinks and mauves common in the artist’s mature production. Also frequent in these themes, as here on the cart, is the inclusion of a chorus of merry girls, whose restless movements are captured with a nervous genius full of vitality. This is very typical of Bilbao's paintings, as a well-known critic pointed out, when he so rightly said that the artist: "pursued the rhythm of grace in his expression of greatest movement; because of this his figures [...] exhibit a restless way of life, and activity that is rather agitated."

Although the last number of the year indicating the date on the canvas is almost completely lost (as is much of the paint around the edges of the canvas), it could be a 4 or more probably a 5. The artist definitely painted the picture in Seville shortly before summer 1915 (the pilgrimage always takes place on Whit Sunday), for, according to a label on the reverse of the canvas, Bilbao sent it to the Pacific International Exposition, which was being held in San Francisco, U.S.A., at that time. Unlike the exhibitions in the main European countries, those in San Francisco had no Spanish section so that, like other Spaniards, Bilbao was obliged to compete in the international section. He was among the four Spanish gold medal winners, the other artists being Andrés Parladé, Carlos Vázquez and Valentín Zubiaurre. Eliseu Meifrèn received a medal of honour. Despite its international character, the exhibition was not promoted in Spain, as no Spanish commissioner attended it and Spain sent only one representative, the Count of Valle de Salazar. Furthermore, as there were no negotiations with the Ministry of Public Instruction and Fine Arts over the payment of shipping costs, the Spanish participants were obliged to find solutions of their own to this problem.

The painting must have been sold in North America or at least on the English-speaking market, as it was auctioned at an English or American house on 25 October 1996.

On the Torrijos Pilgrimage