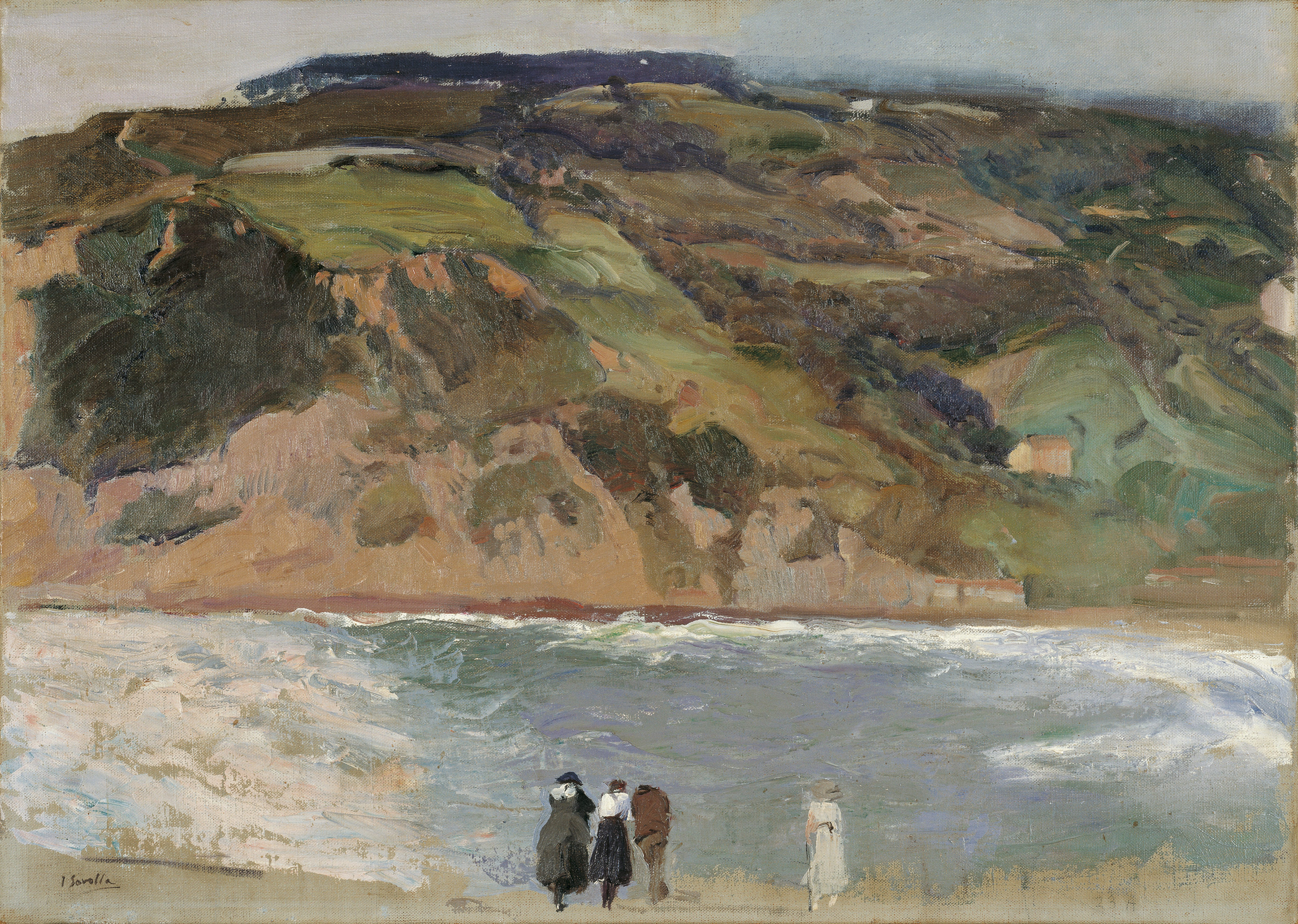 Joaquín Sorolla first went to San Sebastián at a relatively early point in his career. Until 1910, his stays there were often no more than stopovers on his way to Paris. The pictures he painted during those brief periods were basically small in size.

The following year, after returning from the United States, where his second travelling exhibition, sponsored by the Hispanic Society of America and presented in St Louis and Chicago was a huge success, he spent his first summer in San Sebastián. Although he painted practically nothing, as he was resting, he whiled away the time with small sketches for a commission he had received: the decoration of the Hispanic Society of America Library in New York.

The medium-sized painting Maizales en Ayete y al fondo San Sebastián ("Maize Fields in Ayete with San Sebastián in the Background" – private collection) could be attributed to that particular summer and was probably painted from the Villa María Cristina, on the Ayete road, where Sorolla was living with his family. In addition to this, he painted a few colour bozzetti.

Having returned to San Sebastián with his family in summer 1912, he spent the time painting large studies of Guipúzcoa folk and – on short, very productive excursions – other folk from Ansó, El Roncal and Lequeitio. Also from that summer is his magnificent canvas The Nap (Museo Sorolla, Madrid, inv. 985) and a number of landscape studies, all painted on the Aizetsua estate, which belonged to his friend Dr Juan Madinaveitia.

As he was busy with the "decoration" projects, Sorolla did not return to San Sebastián until the summer of 1917. During his stays in the city that summer and the next, he painted many wonderful bozzetti as well as medium-sized pictures of landscapes in the surrounding area – and also its breakwater. His residence for those two years was Villa Sorolla, on the road to the lighthouse on the slopes of Mount Igueldo.

He did not paint beach scenes in San Sebastián as he had at Zarauz. Edmund Peel pointed out that this may have been because Sorolla felt daunted by all that was involved in setting up his equipment for a large painting on a beach which was so fashionable and popular with elegant folk.

There are seventeen paintings of the breakwater at San Sebastián and of views from it with Mount Ulía in the background. It is a series of very fluent works, painted quickly and capturing with extraordinary accuracy the kinds of light which, although so different from those of the Mediterranean, allowed him to reflect colours with a range hard to find in Spain's Levante. They also capture the different states of the sea.

The formats Sorolla used in this series are 52 x 72 cm, except for one work of 63 x 92 cm, two of 81 x 105 cm, and one other of 93 x 106 cm. All the paintings except one were listed in Sorolla's estate and of these, seven are now in the Museo Sorolla. Only six are signed. This painting, Breakwater at San Sebastián, in the more usual 52 x 72 cm format, comes from Sorolla's estate and is signed.

It captures San Sebastián on a typical day – cloudy, wet with a choppy though not rough sea. At the breakwater, various small, very sketchy figures lean against an invisible rail. The important thing is not the figures, however, but the sea and Mount Ulía in the background, both grandiose precisely due to the insignificance of the figures. When studied more carefully the figures seem elegant and quite naturally engrossed by the sight of the motion of the waves and the reflection of Mount Ulía in the water.

Although magnificently executed despite its simplicity, this picture is actually quite sparsely painted.