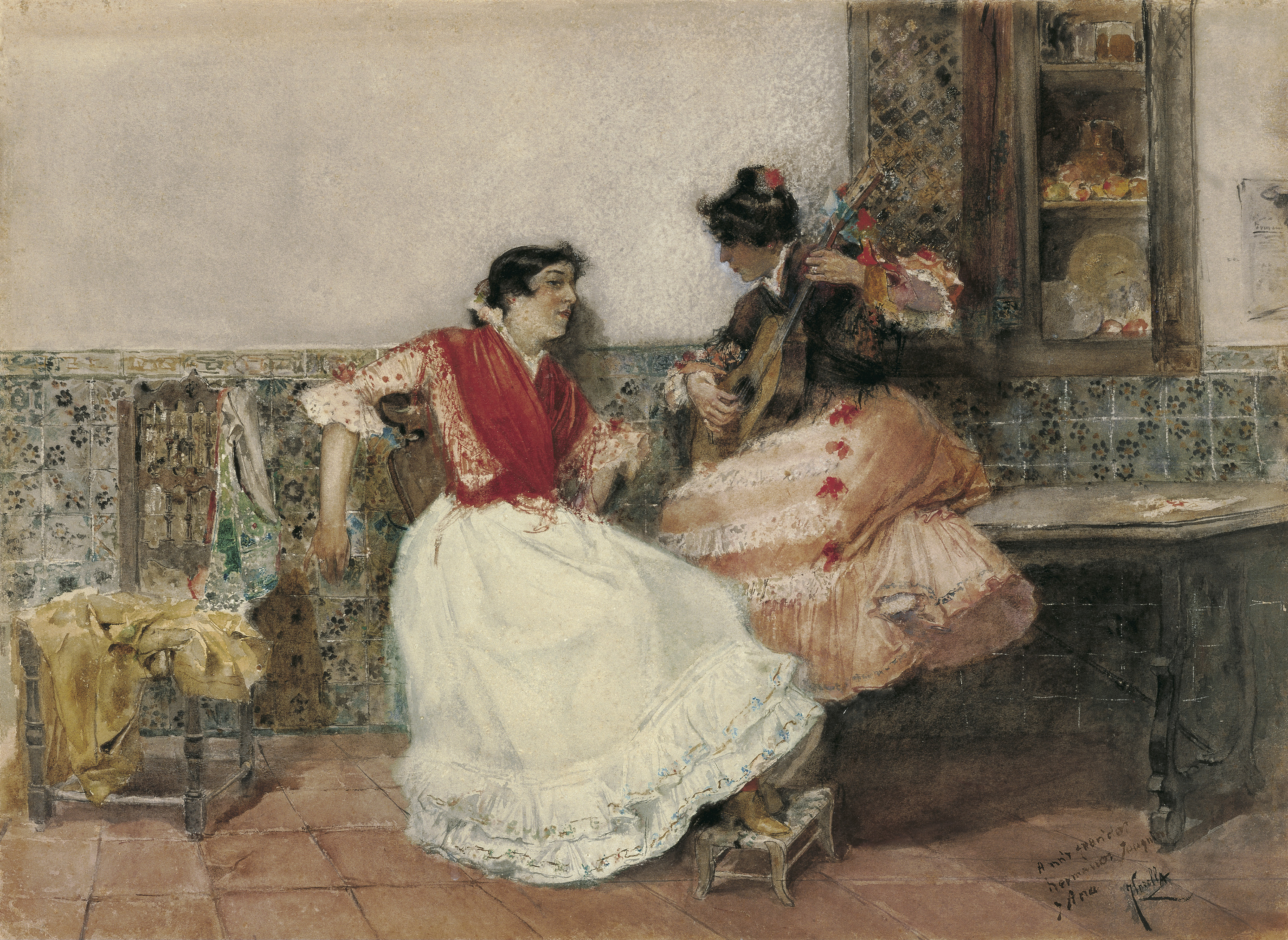 Among Sorolla’s paintings, the watercolours form a group little known by those who have not studied his work, yet important for their number and their significance to the artist. Thanks to them he was able to supplement his scant income in the early years of his marriage.

In 1884, when he was 21 years old, Sorolla passed a public examination organised by the Valencia Provincial Council. He received a grant to study in Italy and travelled there early in January 1885. The grant was extended until 1889, at which time he returned to Spain. For the first years he lived in Rome but after his painting El entierro de Cristo (“The Burial of Christ”, subsequently destroyed, although some fragments are held by the Museo Sorolla) did not win a prize at the Madrid National Exhibition of 1887, he moved to Assisi. In September 1888, he left Assisi briefly to marry Clotilde García del Castillo and then returned for the duration of the last year of his grant.

During the years in Italy and particularly during the Assisi period, Sorolla produced a large number of paintings, mainly watercolours and small oils with genre, Orientalist, Classical, etc., themes – depending on the tastes of the moment. One such painting was Playing the Guitar.

Most of the watercolours Sorolla painted at that time were commissioned by the Alcoy painter and art dealer Francisco Jover Casanova (1836–90). It is not known whether Sorolla first met Jover in Italy or during his short return trip to Valencia to marry Clotilde. Thanks to Jover many artists were able to sell paintings on the Hispano-American market, mainly in Buenos Aires. Jover is known to have been the middleman in the sale of watercolours and small oils by Sorolla thanks to a small notebook which Clotilde kept to record their income. In this notebook, which she began in Assisi in 1888 (the year of their marriage and now on display at the Museo Sorolla), one entry records 12 watercolours sold to “Mr Jover”, for each of which Sorolla received between 150 and 250 pesetas. The last watercolour sold to Jover was painted in 1890, the year of his death. During the two artists’ short business relationship, Jover came to admire Sorolla, to the point that, when Jover died, the young Sorolla was commissioned at the former’s express request to finish the Oath of the Constitution by HRH The Regent Queen María Cristina, which Jover had been painting for the Senate building.

According to the notebook, the total number of watercolours sold between 1888 and 1890 – when Playing the Guitar was painted – were seventeen. Furthermore, according to the same source, the number subsequently sold was also seventeen, with the last record dating from 1902. If the number of pictures which the artist gave away plus those which remained in the family (some are now in the Museo Sorolla) are added to those 34 works, the total is well in excess of 50.1

Two watercolours feature the same chair as that included to the left of the two figures in Playing the Guitar. The first, Pidiendo limosna (“Begging for Alms”) was painted and dated in 1888 and now belongs to a private collection in Buenos Aires; the second, entitled The Spinner, was painted and dated in 1889 and was originally given by the painter to his brother-in-law Juan Antonio García del Castillo. It is now also in a private collection.

At one time the watercolour in question was entitled Valencianas con guitarra (“Valencian Girls with a Guitar”, although this was erroneous as the models’ clothing is not of the kind worn in Valencia, and the lower half of the wall is tiled. This was the case in almost all of the genre watercolours of those years and again in the watercolours he painted ten years later. The model on the right playing the guitar could be Sorolla’s wife. Indeed, his wife often posed for this type of watercolour, above all for the Valencian genre paintings. That would be more than logical in this particular case, since Sorolla dedicated and gave the painting to Clotilde’s older sister, Ana García del Castillo, who married Joaquín Martínez Imbert in 1880.

The measurements of the watercolours from those years vary greatly, the smallest being 40 x 23 cm and the largest 56 x 95 cm. Sorolla’s signature with the R and A in capital letters and the flourish in the form of a V on its side is typical of his early years as a painter and is found basically in works dating from between 1883 and 1889, after which it is extremely rare to find paintings signed in this way.

Although I do not question the quality of Sorolla’s watercolours, it is true to say that he made much less progress as a watercolourist than as an oil painter and that he finally turned from watercolour altogether to painting gouaches, a genre in which, despite the limited production, he managed to produce works of very high quality and expressive power.

Playing the Guitar passed from the Martínez Imbert-García family to a private collection in Valencia. It was auctioned on 31 May 1988 at Sotheby’s Madrid, where it was expected to sell for between 4 and 6 million pesetas. In 1994 it was acquired from the Gothsland Galeria d’Art for the Carmen Thyssen-Bornemisza Collection.