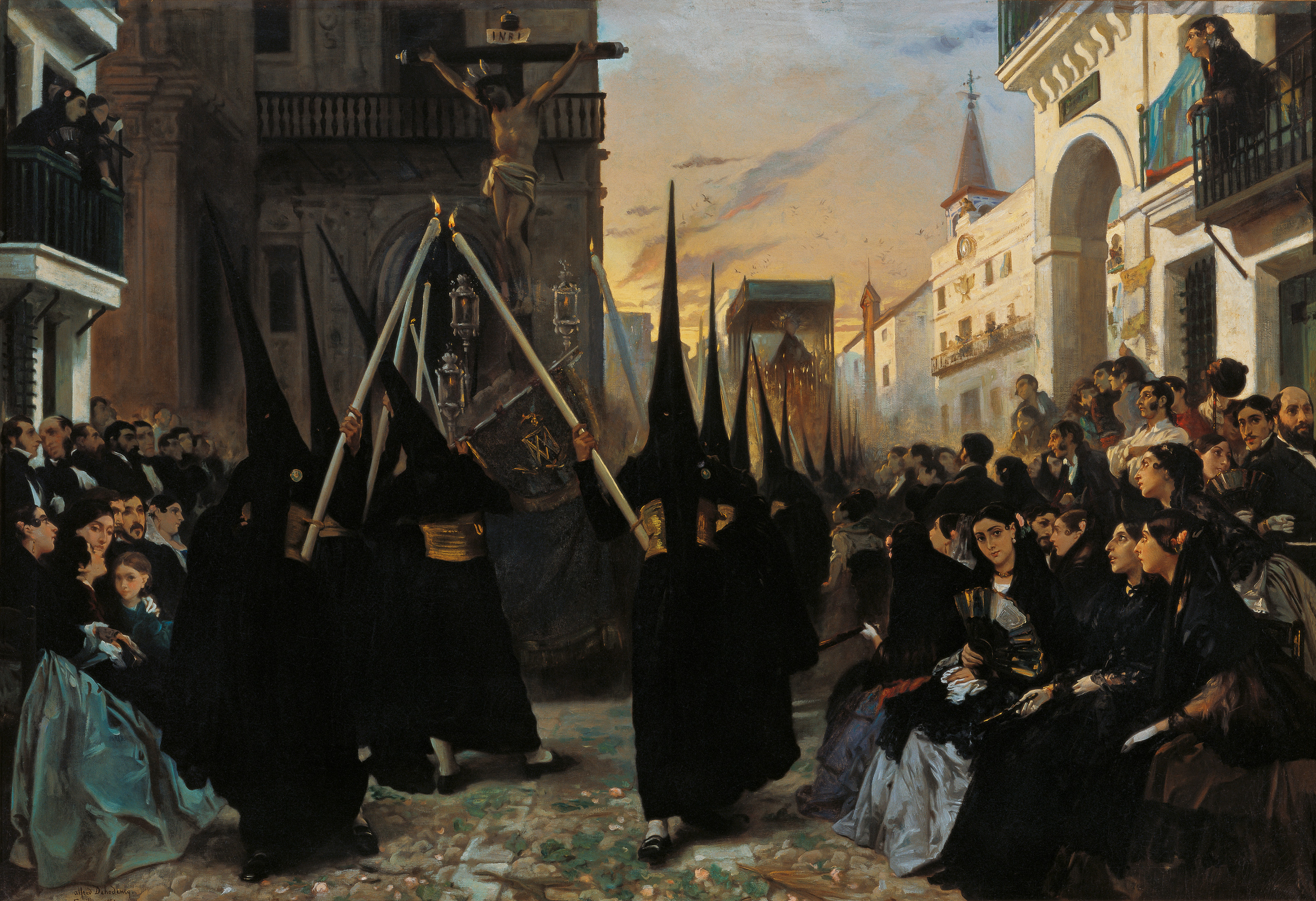 A Confraternity in Procession along Calle Génova,

This painting forms a pair with A Gypsy Dance in the Gardens of the Alcázar outside the Pavilion of Charles V. Both works hung in the Square Hall of the palace of San Telmo in Seville, the residence of the Duke and Duchess of Montpensier, Antonio of Orleans and Luisa Fernanda, the sister of Queen Isabella II of Spain.

During the reign of Isabella II, the Duke and Duchess of Montpensier instituted a sort of parallel court in their palace in Seville, becoming the patrons of a large number of contemporary Romantic painters. These included Andalusian painters but also foreigners, particularly French artists, who shared the same origins as the duke and travelled to Seville under the protection of the Montpensiers, drawn by the Romantic vision of the exotic picturesqueness of Spain that was particularly embodied in the landscapes, cities and people of Andalusia. Artists such as Pharamond Blanchard (1805–73) and Adrien Dauzats (1804–68), as well as Dehodencq, executed some of their most important works for the Montpensiers to decorate not only the halls of the San Telmo palace on the banks of the Guadalquivir, surrounded by the prettiest garden in Romantic Seville, but also their seasonal residences at Sanlúcar de Barrameda (Cadiz) and Castilleja de la Cuesta (Seville).

Dehodencq arrived in Seville in November 1850 and immediately entered the service of the Duke of Montpensier, who entrusted him with his first commission for "two fairly large pictures, which should show: one, the religious aspect, and the other, the voluptuous aspect of Spain". Dehodencq used two of the most genuine and typical expressions of the Andalusian character which are apparently contrasting but are in fact complementary: Holy Week and flamenco dancing.

Dehodencq’s first canvas shows a procession along the Calle Génova during the Easter celebrations in Seville. The road is packed with people pressed along the stone-paved road lined by rows of seated women of high social status sporting black mantillas as a sign of mourning for the death of Christ, accompanied by distinguished-looking gentlemen standing behind them. Two rows of members of the confraternity in black habits bearing long lit torches escort the float of the crucified Christ belonging to their brotherhood, whose banner one of them carries. They are followed in the background by the processional image of the Mater Dolorosa, lit by a mass of candles and under a canopy, as is characteristic of Sevillian images of the Virgin.

A Confraternity in Procession along Calle Génova,