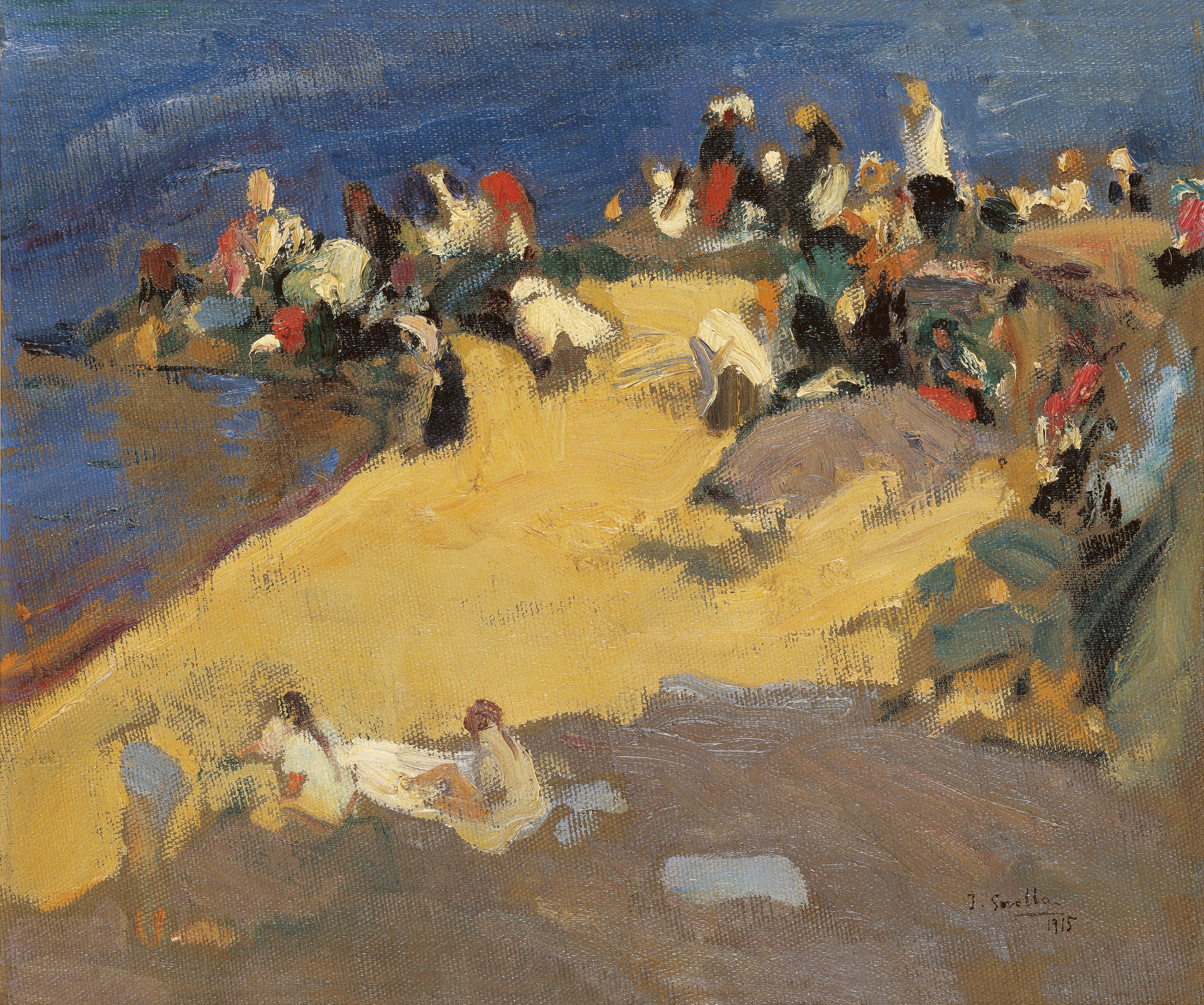 Although this painting is not directly connected with the magnificent decoration at the Hispanic Society of America Library in New York, it was executed at the same time as one of its panels: Galicia, The Pilgrimage, painted between 15 July and 15 September 1915. Without a doubt this scene was taken from the ria or inlet of Arosa (as I shall explain below) and is not reproduced in the panel, although the inlet itself is featured.

At the beginning of 1915, Joaquín Sorolla was in Seville, painting two of the five panels dedicated to Andalusia. In February he finished Seville, The Dance and then started work on The Bullfighters, which he completed in April. After a short stay in Madrid, he travelled with his son to Valencia and Barcelona, where he sought out the theme and location to paint the panel dedicated to Catalonia. However, due to ill health, he decided to return to Madrid. He took a short rest with his family in Valencia near the beach at Malvarrosa from the beginning of June until mid-July. This "rest" was relative because he did not stop painting magnificent beach scenes during that time. However, it enabled him to regain his strength in preparation for the next panel.

He arrived in Villagarcía de Arosa, again with his family, in mid-July. Using the ria de Arosa as the background, he painted his panel dedicated to Galicia: The Pilgrimage.

Little is known of his stays in Galicia, for every time he went there it was with his family, which meant that the usual kind of abundant family correspondence that is always so useful in helping to date his paintings and even telling us his opinion of them, does not exist. All that is documented is an interview with Alejandro Pérez Lugín in Villagarcía in August 1915 entitled La capa de Sorolla y la montera de Huntington ("Sorolla's Cape and Huntington's Bullfighter's Hat"), published in El Heraldo, where Sorolla is quoted as saying: "I think that Galicia is the most difficult part of the country to paint, due to the variety, due to how easily everything changes."

It was not the first time Sorolla had spent the summer in Villagarcía, as he had done when his children were small, and yet only two studies of that inlet exist, both dating from 1915: this small painting and another that is identical in size – La ría de Villagarcía de Arosa ("The Ria at Villagarcía de Arosa"). Together with the date and the signature on Galician Washerwomen, the former enabled us to establish the setting for the painting.

In addition to being the same size (the measurements are unusual for a Sorolla painting) they display the same kind of (also unusual) canvas and stretcher. Furthermore, in both, the dark sepia of the priming is of a kind not found elsewhere in the preparation of Sorolla's canvases, which leads us to the conclusion that the canvases were purchased in Galicia.

Both works were given to good friends of the family: Galician Washerwomen to a well-known Galician physician who lived in Madrid and became a close friend after treating Sorolla's son for a disease contracted in 1913, and La Ría de Villagarcía de Arosa, which came from Sorolla's estate (no. 32, series L), was given by Sorolla's widow, Clotilde García del Castillo, to a photographer friend shortly after the painter's death. In a note from Clotilde to her daughter María, in which she listed the sketches from Sorolla's legacy given to friends and charities, she called this painting Paisaje de Villagarcía ("Villagarcía Landscape"), the same name as that listed in the inventory. This fact also proved to be very important when it came to confirming where that work was executed, since, viewed from a height, the ria landscape – like Galician Washerwomen – features a group of washerwomen on the shore in the foreground.

It is also interesting that the two pictures were painted at different times, since neither the light nor the position of the figures are the same.

Galician Washerwomen is surprising for its power in the colour of the water. Without doubt it was painted on a cloudless day, since the blue is that of the sky reflected in the water – as was the case with the panel Galicia, The Pilgrimage, where the blue is also very intense. Though also filled with light, the other study of the inlet was painted when the sky was covered with light cloud with violet and green tones typical of that region, which suffuses the painting with softness.

Less common at that time in Sorolla's work, the thick impasto used in the figures in both paintings contrasts with the thin layer of turpentine-thinned paint used in the inlet and the landscape in the background.

In all likelihood these two scenes were painted from Vista Alegre Castle, where Joaquín Sorolla set up his studio during the summer stay with his family. He remained in Galicia, painting his panel, until mid-September, then travelled to Barcelona, starting work at once on his panel The Fish, which is dedicated to Catalonia.