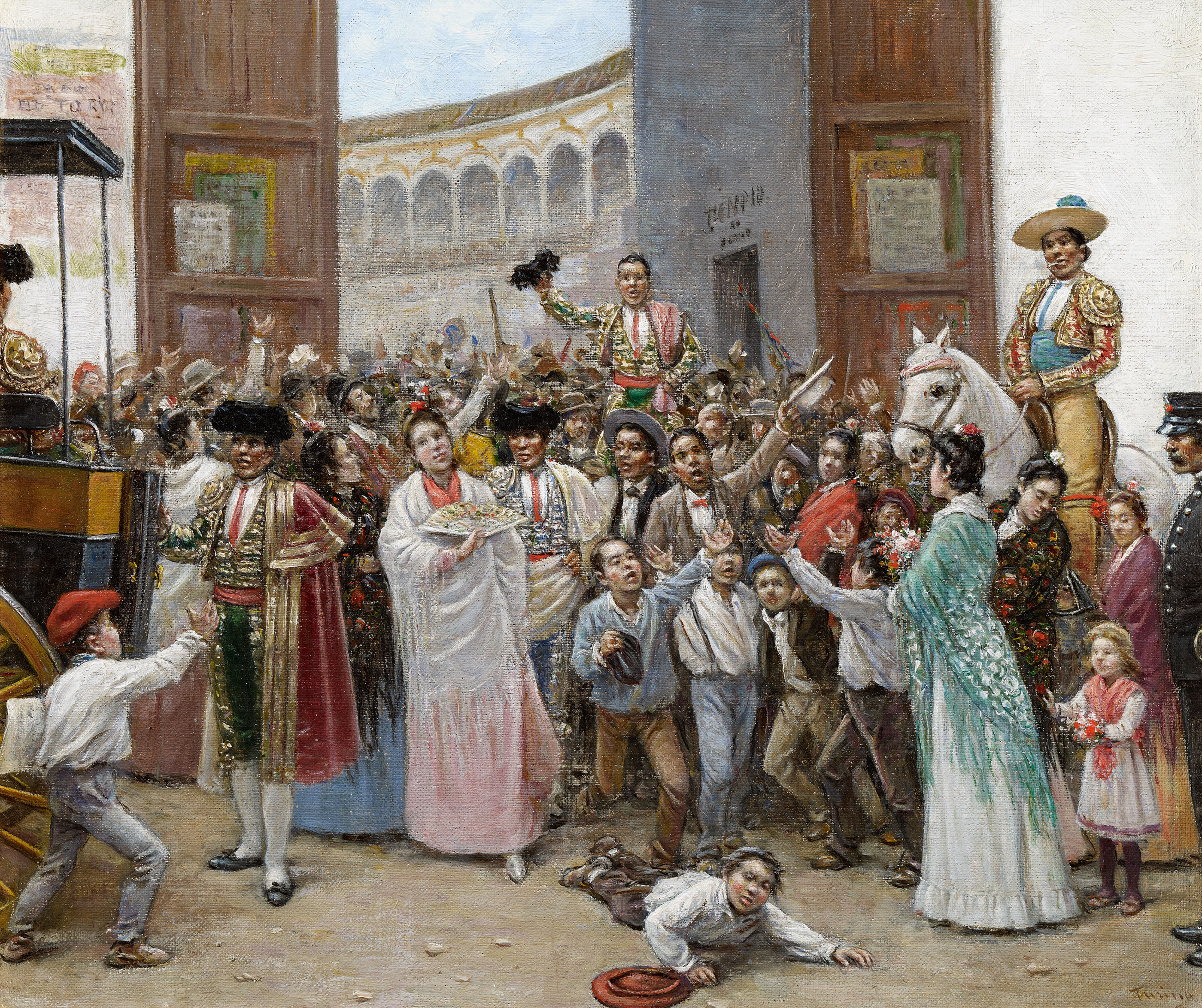 Triumphal Exit from the Maestranza Bullring in Seville

Unlike Goya and most of the artists who depicted bullfight themes in the 19th century, far from being interested in representing the tense, violent moments of the bullfight, Turina shows the glorious finale in which the maestro is carried out of the ring on enthusiasts’ shoulders through the puerta grande or main entrance – a privileged reserved for bullfighters who have performed particularly well – waving to the feverish public, hat in hand. The fact that the painter does not characterise the bullfighters and alludes generally to these triumphal exits following an excellent performance appears to indicate that Turina was concerned not so much with leaving a faithful testament to a specific event but with immortalising the glory enjoyed by matadors after risking their lives in the ring.

The Real Maestranza bullring in Seville is easily recognised from the background arches, and the entrance is therefore located practically opposite the prince’s box.

Together with the triumphant bullfighter who is the main focus of the scene, the spectator’s attention is also caught by a picador who leaves the ring still on horseback and the rest of the bullfighter’s assistants, who appear to be making their way towards a covered trap of which only the rear part is visible on the left of the composition. Among the crowd are a few young women wrapped in their shawls – a characteristic feature of Turina’a production – and children in the foreground, one of whom has fallen over and attempts to pull himself quickly to his feet.

The rapid, sketchy execution of the work, in which only the foreground figures are defined, helps recreate the festive and cheerful bustling atmosphere of the bullfight. Although Turina differed from other artists of his stature on account of his precise working method with a focus on draughtsmanship and enamel-like surfaces, in this small painting he only depicts the physical characteristics of the human types; it is much less finished and the detailed description of the figures gives way to a recreation of the festive atmosphere marking the end of the bullfight. In this connection it should be recalled that the exit from the bullring was a popular theme with genre painters, as shown, among others, by Cortellini’s Leaving the Bullring and Lucas Villaamil’s Leaving the Bullring in the Rain, also in this collection.

This painting attests to the twilight of a genre which, during the crisis of ’98, lost the recreational significance it had had in Romantic genre painting and became a focus of the criticism levelled at the sport by regenerationist authors, who linked the world of bullfighting – including paintings that depicted it – with the ignorance and frivolity of a people incapable of coming to terms with their own decadence. This period therefore marks the chronological limit for dating the work.

Triumphal Exit from the Maestranza Bullring in Seville